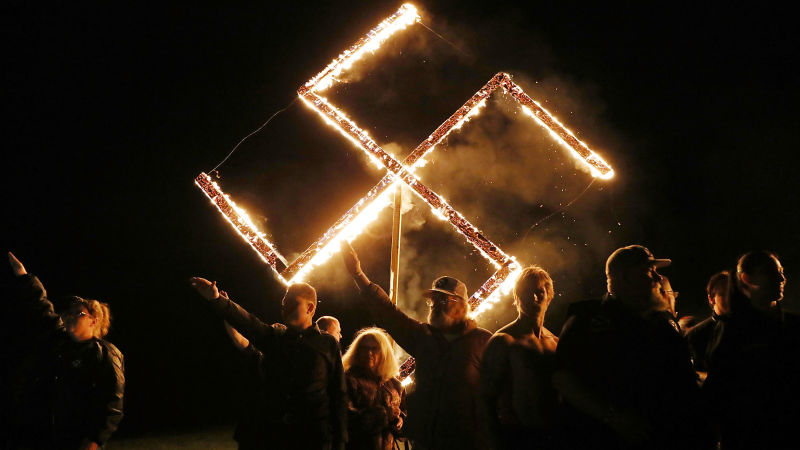 We haven’t quite reached this stage, thank God. In the US, Nazis like these yahoos in Georgia are still a fringe group. Neo-Nazis are much more subtle, and much more dangerous.

The New York Times has brought forward its planned cover story for next week to coincide with the US midterm elections. It’s a horrific story about the rise of neo-fascism and the real threat posed by white nationalism.

White supremacists and other far-right extremists have killed far more people since Sept. 11, 2001, than any other category of domestic extremist.

And yet as the NYT details, it’s been almost entirely ignored by law enforcement.

Data compiled by the University of Maryland’s Global Terrorism Database shows that the number of terror-related incidents has more than tripled in the United States since 2013, and the number of those killed has quadrupled. In 2017, there were 65 incidents totaling 95 deaths. In a recent analysis of the data by the news site Quartz, roughly 60 percent of those incidents were driven by racist, anti-Muslim, anti-Semitic, antigovernment or other right-wing ideologies. Left-wing ideologies, like radical environmentalism, were responsible for 11 attacks. Muslim extremists committed just seven attacks.

Meanwhile the US President vilifies muslims and describes white supremacists as “good people”. But this isn’t just a problem with the current administration. As the NYT notes, it goes back decades and its anti-semitism goes back further still. It’s just that a toxic mix of right-wing politics, shockingly negligent journalism and institutional incompetence has created the perfect storm for it to flourish. Some 22 million Americans currently believe that neo-Nazi or white supremacist views are perfectly acceptable. And there are multiple credible reports of white supremacist groups deliberately targeting law enforcement jobs, moving what’s already a largely conservative workforce much further to the right.

As I’ve written many times before, social media has played a significant role in normalising and spreading neo-Nazi propaganda. The NYT again:

alt-right memes, while dripping in irony, were also, in essence, hate speech, part of a propaganda war arguably intended to spread terror just as much as any ISIS execution video.

The so-called debates we see, the platforming of the likes of Steve Bannon or various alt-right “shitlord” trolls, are playing into their hands. They’re amplifiers, enabling extremists to reach enormous audiences. What liberal media types (yes, people like me) seem unable to understand is that they’re being played. The alt-right aren’t interested in debate. For them, there really is no such thing as bad publicity.

We’re living in very frightening times, I think, and things are going to get worse before they get better.