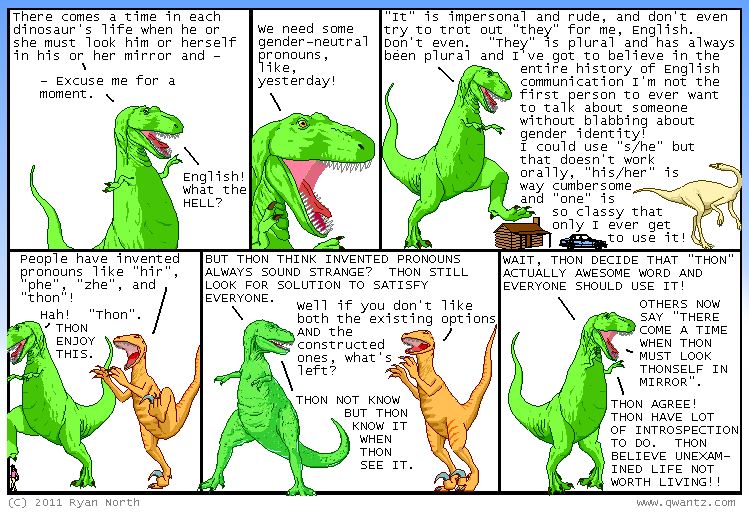 My previous post about How To Write Good included some really inelegant pronoun use: I wrote about “she/he” in connection with an unnamed, entirely imaginary writer. That looked and read awfully, so I changed it to “s/he”. Which made it worse.

It turns out that it’s better to avoid gendering things that don’t need to be gendered. Instead of he or she, the singular pronoun “they” is much more elegant.

This is hardly a zany new thing. “They” has been an acceptable singular pronoun for the last 500 years or so, as the Grammarly blog points out:

Merriam-Webster includes usage examples of the singular they dating back to Shakespeare, with notable additions from the likes of Jane Austen and even the traditionalist W. H. Auden.

The blog also features this wonderful bit of trivia.

Unfortunately for prescriptivists, English is constantly changingâ€”and always has been. Some words that grammar pedants scoff at as obnoxious neologisms were in fact coined as long ago as the nineteenth century. Take â€œdudeâ€ for example. Reviled by grammar trolls the world over, this term has provoked the ire of multiple generations of fuddy-duddies. But did you know that it has its roots in late nineteenth-century British dandyism?

One of the reasons we get so excised about gender-neutral pronouns is because of our old pal the patriarchy. Grammarly again:

Traditionally, he was the default pronoun for a person whose gender you didnâ€™t know

William Lily there, mansplaining in 1567.

…Using the singular they makes English a more efficient language, and it helps us to avoid awkward sentence constructions. More importantly, it allows you to avoid making assumptions about the gender of a person you donâ€™t know.

It also makes my blog posts slightly better. Everybody wins!