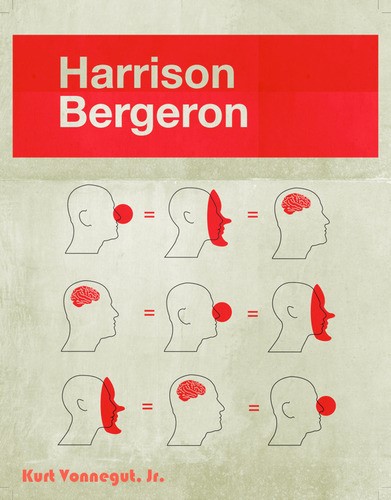 I read Harrison Bergeron when I was a mere slip of a lad, about 20 years after it was first published. It’s short and funny and beautiful and terribly sad, and I can’t think about the ending without crying.

It’s stayed with me ever since I first read it. It was the gateway drug that gave me a lifetime love of Vonnegut’s work (and his writing style, which I’ve shamelessly nicked), and like much of Vonnegut it’s eerily prescient: the things happening to the characters (I don’t want to spoil any of it) are like today’s social media distractions.

The story was published in one of those sci-fi anthologies, and it must have been a particular good one: it also featured the utterly terrifying DescendingÂ by Thomas M Disch, which I think about every time I descend into the Subway.