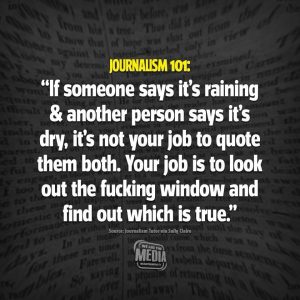 I regret to inform readers that noted fantasist Andrew Gilligan has written another article. This week he’s suggesting that the City of London may let trans women use the ladies’ toilets…

…which the City of London has been doing for eight years, because that’s the fucking law.

Gilligan is well aware of the Equality Act 2010 and is reminded of it whenever he writes untrue things about trans people or their allies. He just chooses to pretend otherwise, because he’s a disgrace to journalism.

Edward Lord, chair of the City of London’s establishment committee, on Twitter:

To be clear, thanks to the Equality Act 2010 #trans people are already welcome to use the @cityoflondon loos that most suit their gender. It is a shame that @mragilligan and @thesundaytimes have chosen to publish such a misleading article about our #GenderIdentity consultation.

The most famous words in US journalism are the New York Times’ motto, “all the news that’s fit to print”. The Sunday Times repeatedly swaps “fit” with “shit”.