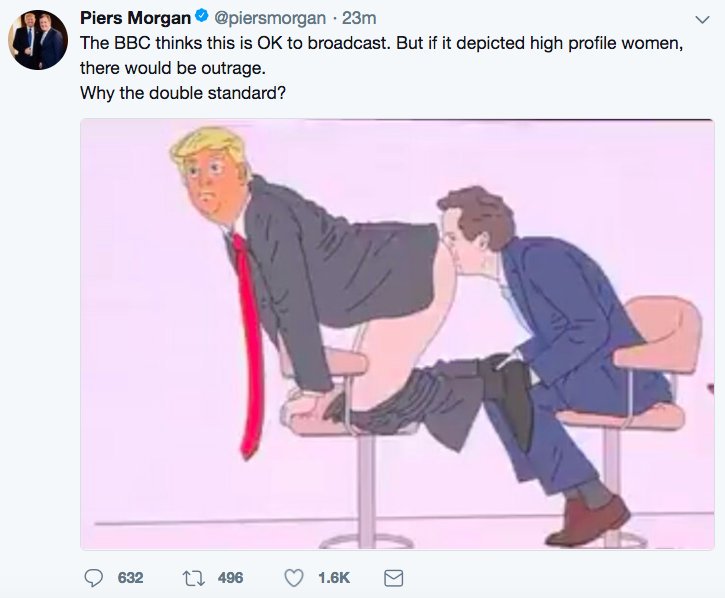 There’s a good piece in The Pool byÂ Yomi Adegoke about Alan Sugar’s racist tweet, or rather the reaction to it from media types such as the odious Piers Morgan.

AsÂ Adegoke points out, there does appear to be a double standard here. When a black presenter says something that appears to be racist, they’re gone. White presenters? Not so much.

It’s interesting to contrast Morgan’s spirited defence of Alan Sugar, who is white, with his criticism of trans model Munroe Bergdorf, who is not.

According to Morgan, Bergdorf was “rightly fired” from her role at L’Oreal for “calling all white people violent racists.” That isn’t quite what she said, but Morgan’s never been great at facts. As far as Morgan is concerned, because Bergdorf said something he finds “deeply offensive”, it’s right and proper that she should lose her job.

If only there was a word for somebody who treats people differently based on the colour of their skin.

Incidentally, I was at the recording of a (non-broadcast) TV showÂ pilot the other night where one of the topics wasÂ offensive speech. It was introduced via an unfunny video by a straight, white, cisgender male comedian who said that he had the right to say whatever he wanted and if anyone had a problem with it they should just fuck off.

The issue was then discussed by the three panellists, two of whom were straight, white, cisgender men (a pundit and a comedian respectively). They concluded that the right of straight, white, cisgender male pundits and comedians to offend people was much more important than minorities’Â right to be treated with dignity and respect. OneÂ panellist disagreed with them and attempted to explain the importance of intent and context, but she was a woman so her opinions didn’t count.