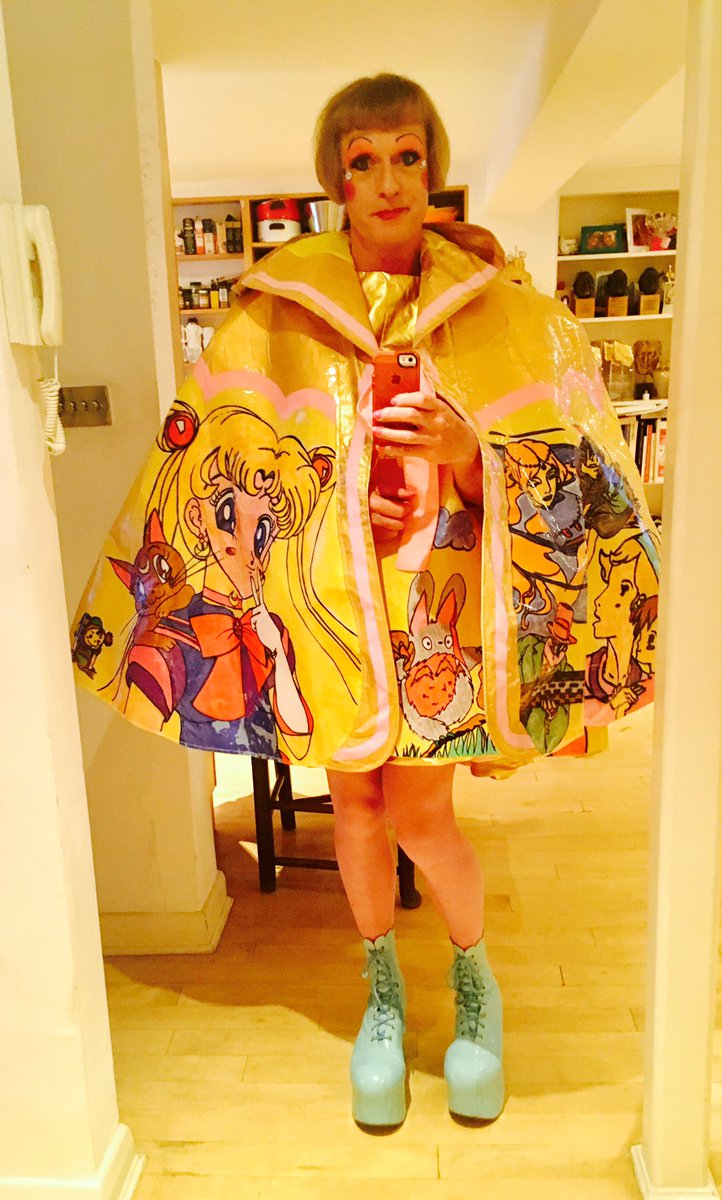 Might it be true to say that people who have a problem with, eg, this are at some level reacting to the idea of _them_ wearing it, whereas Iâ€™m just really happy the world contains Claire wearing it. Itâ€™s wonderful.

I agree. I’m a big fan of Perry â€“ his book, The Descent of Man, is great â€“ and I love the way Claire’s outfits are closer to the distorted art of Ralph Steadman or Quentin Blake than any kind of everyday clothing. I love the colours, the proportions, the exaggeration. I think Perry/Claire is fascinating and funny and provocative and generally winding up the kind of people who need winding up.

I couldn’t respond properly to Chris’s point earlier because I was in the middle of something that couldn’t wait. But he’s right. There’s a subtext to the horror some people have for a man in a dress.

Misogyny is whyÂ women still have to fight to get access to essential healthcare, why women in some countries are still campaigning for fundamental human rights and why victims of rape face aggressive questioning in court as newspapers worry about the effect on the rapistâ€™s stellar career.

For example, a few months ago, the BBC aired a phone-inÂ about calls for women-only train carriages, the response to new research showing sexual assaults on women in trains have doubled in five years.

That weâ€™re even discussing segregation as a solution shows just how messed up things are: of course the solution is to stop men from assaulting women in the first place and to severely punish the men who commit such crimes.

But you canâ€™t fix that with extra rolling stock. You need to change the whole culture.

That culture affects trans people too. If you aren’t obviously trans you just get the misogyny. If you’re visibly trans or non-binary you also get some extra fun in the form of homophobia and transphobia. People assigned male at birth get the lion’s share of that because to embrace any kind of femininity is to go against The Natural Order Of Things.

Generally speaking nobody really cares what aisle a woman shops in; terms such as â€œboyfriend shirtâ€ and â€œboy shortsâ€ are part of everyday fashion, women cheerfully raiding or getting inspiration from menâ€™s wardrobes for whatever they fancy.

Thatâ€™s not to say women arenâ€™t judged for their choices or for their bodies and appearance, because of course they are, often harshly and publicly: body shaming and slut shaming are common online and in certain publications too.

But in the west women neednâ€™t fear public opprobrium or physical violence for wearing a manâ€™s shirt.

A man wearing a skirt evokes a very different reaction.

Just look at the way gender-neutral school uniforms are reported in the media: nobody worries about girls in trousers or shorts. The dramaâ€™s always. always about the entirely invented prospect of boys being â€œforcedâ€ to wear skirts.

In terms of uniforms, quite a lot. Girlsâ€™ school uniforms are less practical than boys’ â€” climbing trees in a dress or skirt means someone might see your pants, a situation that must be avoided at all costs â€” and theyâ€™re policed in ways boysâ€™ uniforms are not, apparently because boys and men are incapable of learning or teaching if they can see a female knee.

In 2015 one school, Trentham High School in in Stoke-on-Trent, banned skirts altogether on the grounds that they were too distracting to male staff and students.Â

Imagine hiring teachers you don’t think can be trusted if young girls’ legs are visible. Imagine thinking the solution to that is to make all girls cover their legs.

Here are some of the responses to that story on Debate.org, a popular discussion site. â 1

I bet you canâ€™t guess which gender the posters are.

You have no idea how it feels, physically and emotionally, to be a young boy surrounded by that which he desperately desires yet forbidden to follow his biologically urgent impulses.

You don’t wear clothing because your looking at them, it’s for people that see you throughout the day. These boys aren’t guilty of anything other then noticing what your advertising. Sham on you for advertising perversion girls!!

Leggings can be a distraction to boys. Educating young people today is difficult enough. Cut down on as many distractions as possible.

Even it is more comfortable to wear it doesn’t matter. What does though is the end result. Fact is when you wear leggings boys will get aroused. It’s not even objectification, it’s just being a teenage boy, your horomones get wild. You put yourself in some revealing “pants” and then say that its the guys fault for being aroused. It’s not, we aren’t the ones objectifying you girls, you’re doing it yourselves.

Get rid of all leggings from public. I am very disturbed of the lack of class women and young women have today. I guess modesty is a thing of the past. I’m tired of the “norm” being clothes that suck up into parts that should be kept private. Don’t get me started on what it looks like when they bend over. The bigger the body parts the less the fabric can cover it can only stretch so far. I feel like these women/young women are walking around naked with a thin layer of paint on.

Young men like looking at women’s butts, especially when they are wearing tight and revealing clothing. Anyone who thinks a young man will be respectful and not be affected by this is kidding themselves or childishly naive. If women really don’t want to be sexually objectified, they should know better than to wear such clothing around large groups of young men. This is the type of common sense people have had for generations and is somehow deteriorating in this country.

Gilrs (sic) wear what they wear, to a degree, for attention. They secretly love the attention, they just don’t want to be objectified….Also they don’t like it when guys whom they deem as “creeps” and “pervs” are noticing them. Guess what girls? Youre in public, theres no filter on who does and does not see youâ€¦ Girls saying boys are the problem for looking is ridiculous. You walk around wearing something that reveals bodily form what do you expect?

There are many, many more in a similar vein.

The reason some people fear boys being â€œforcedâ€ into skirts is because they have beliefs very similar to the ones above: girls exist solely for the enjoyment of men, and their clothes advertise their sexual availability. A boy in a skirt would be sending the same messages.Â

And thatâ€™s what a lot of the outrage boils down to. We donâ€™t want boys to be treated like girls, because we all know how badly girls are treated.