Following on from yesterday’s post about violent, insecure men and shootings. here’s how the AR-15 assault rifle used in the most recent shootings (including Sandy Hook and yesterday’s atrocity) has been advertised. 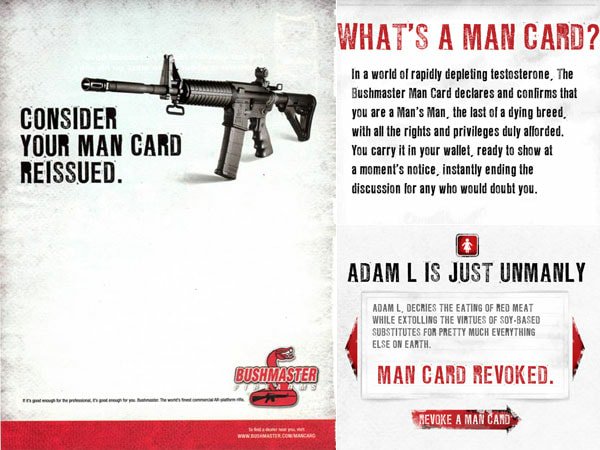 This one dates from 2010. In the accompanying press release, Bushmaster Firearms explained:

…visitors of bushmaster.com will have to prove theyâ€™re a man by answering a series of manhood questions. Upon successful completion, they will be issued a temporary Man Card to proudly display to friends and family. The Man Card is valid for one year.

Visitors can also call into question or even revoke the Man Card of friends they feel have betrayed their manhood.

It refers to cultural norms that equate masculinity with control, aggression, and violence and that label emotion, compassion, and empathy “unmanly.”

And sells military assault rifles as the solution.