It’s about time we all stood up to defend, er, bullying

Thereâ€™s something very strange happening in the UK media. Itâ€™s defending the bullying of children.

Last month, Peter Hitchens claimed in the Mail that banning smacking would â€œcome back and slap us in the face.â€ The state has too much power, he said, noting that â€œFathers, once kings (or despots) in their own homes, have been declared officially unnecessary.â€ As he explained, mistaking correlation for causation:

In the days of smacking, police walked around alone in tunics with no visible weapons. Now they make their rare public appearances in pairs or squads, clad in stab vests, clubs, pepper sprays and handcuffs.

Because of course absolutely nothing else in the world has changed politically, socially, culturally or economically.

They also roped in Jan Moir to opine, after detailing the barbaric discipline that used to be commonplace in schools and telling the hilarious story of her mum using a kettle â€œto ding my brother on the bonceâ€:

we all lived through an age of crime and home-grown or class-based punishment. And it didn’t do us any harm.

Imagine! Some people think whacking a child with a kettle is bad!

Today, to mark anti-bullying week, the Church of England has updated its anti-bullying guidelines for nurseries and primary schools. If a three-year-old wants to play with toys or clothes associated with the other gender,the guidance says, they shouldnâ€™t be told not to or mocked for it.

‘A child may choose the tutu, princess’s tiara and heels and/or the fireman’s helmet, tool belt and superhero cloak without expectation or comment’ 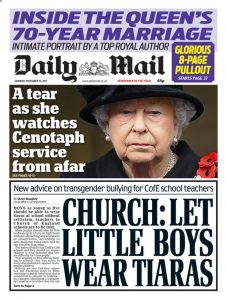 The article notes with disdain that â€œSchools are also told they cannot use the Christian faith or Bible teachings to justify behaviour that is considered to amount to bullying â€“ for example, identifying a transgender pupil by a sex other than the oneÂ they have chosen.â€

“Behaviour that is considered to amount to bullying”. So, bullying.

In an interesting coincidence, over the weekend the Mail on Sunday described how a teacher was suspended over allegations about, ahem, behaviour that is considered to amount to bullying.

â€œI called a trans boy a girl by mistakeâ€¦ and it may cost me my job as a teacher: Maths tutor suspended after praising pupil using the wrong gender,â€ the headline says.

Heâ€™s an evangelical pastor and the complaint against him alleged ongoing inappropriate behaviour, such as trying to shoehorn his religious beliefs into his maths lessons, and concern that he was picking on a trans child by deliberately and frequently misgendering him as well as detaining him unnecessarily. He denies â€œinappropriatelyâ€ talking about religion in maths lessons. The word â€œinappropriatelyâ€ is doing a lot of work there.

He added, however, that he did not feel that he should be made to use the pronouns â€˜heâ€™ or â€˜himâ€™ and that to force him to do so was a breach of his human rights.

Like many people who find themselves represented by the Christian Legal Centre, whose dread hand is behind this story, the tutor in this story appears to be an arsehole.

The Mail on Sunday – and today, the Sun – has also dragged up (pun fully intended) a story from back in June:

Drag queens are being brought into taxpayer-funded nursery schools so that children as young as two can learn about transgender issues. 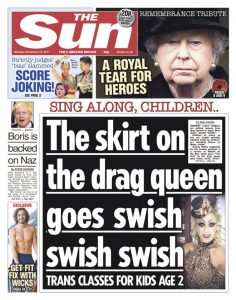 The performances, which are being trialled in a grand total of one nursery, are so newsworthy that the Sun has made them its front page story.

Thereâ€™s a really horrible final sentence to the Mailâ€™s version, too. Noting that the nursery in question decided to trial the performances in response to increasing hate crimes, it says:

Reported hate crimes rose 29 per cent in the last year, Home Office figures show, although only one in six was considered serious enough for a suspect to be charged.

If you find yourself defending the beating of children and campaigning against anti-bullying initiatives, this video may resonate.