I just know that something good is gonna happen

[The title’s from Kate Bush’s Cloudbusting.] 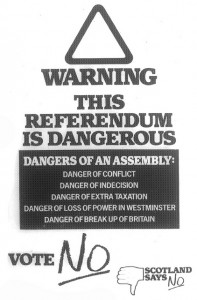 I didnâ€™t vote in the 1979 devolution referendum for one very good reason: six-year-olds aren’t allowed to vote. But thanks to the wonders of the internet and newspaper archives, Iâ€™ve got a pretty good idea of what happened. Scotland was given the chanceÂ to vote for devolution (not full independence, just its own Assembly) and the establishment told it this:

Scotland voted Yes anyway, but the government decided that too few Scots had voted, so that meant No.

It didnâ€™t get to keep the industry either. 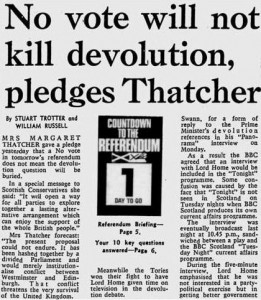 As a schoolboy, I watched what happened to my home town when the steelworks shut down and all the businesses it supported, from taxis to restaurants, shut down too. Friendsâ€™ dads lost their jobs at the Linwood car plant when it closed. I remember being scared of the WH Malcolm trucks with steel mesh over their windows thundering past our town to smash through picket lines. And as an adult, I taught long-term unemployed former steelworkers and shipyard workers how to use computers forÂ the clerical jobs that they and I knew they would never get.

Iâ€™m getting terrible deja vu. The images in this post are from 1979 (courtesy of the Scottish Political Archive), but design aside the poster could be from Better Together and the article from this week’s newspaper.

Iâ€™m not an SNP supporter (or a supporter of any other party) and as a part-English, part-Irish, part-Welsh Scot Iâ€™m as British as they come. But as a result of lots and lots and lots of research, Iâ€™ve gone from a definite No to an enthusiastic Yes. Iâ€™m enthusiastic because Iâ€™d like to see us become a key player in renewable energy, to see the money we currently spend on nuclear weapons spent on things that really matter, to have a political system thatâ€™s more representative, to invest our oil and gas revenues rather than squander them. I could go on, but you get the idea.

I donâ€™t think itâ€™ll be perfect. Iâ€™m sure there will be problems to overcome and challenges to face. But I also believe that if we donâ€™t take this opportunity, we wonâ€™t get the status quo; weâ€™ll get something much worse.

Thatâ€™s not why Iâ€™m voting Yes, though. My vote is a positive one, not a negative. Iâ€™m not voting against Westminster, or reacting against Better Together’s negative campaigning. Iâ€™m voting for Scotland. I think we could be an amazing country, and I have faith that the people who live, learn and work here can make something truly special.

We’re living in exciting times, and next week’s vote is an amazing opportunity.

How often do you get the chance to make history?