Whenever you hear “stakeholder”, somebody’s doing something awful

Glasgow’s famous George Square is going to get a Â£15 million makeover. On the one hand that’s great, because it’s not as nice as it used to be. On the other hand it’s terrible, and not just because the council’s spending 15 million quid during a recession in a city well known for its terrible poverty and ill-health. It’s beginning to look like a terrible act of vandalism is going to happen.

The council’s plans include removing all the statues – statues that council leader Gordon Matheson calls “unknown, lifeless relics from a bygone era” – preventing people from assembling in the square and generally turning it into a giant paved area. And of course the proposed designs are all truly awful. 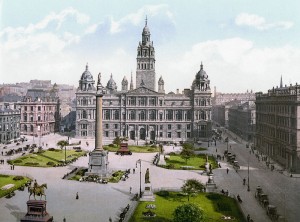 Here’s what it looks like now, on the rare occasions when it isn’t covered in marquees and security fencing for some event or other: 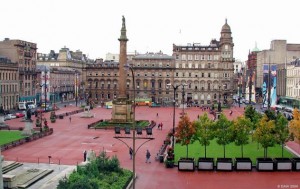 And here’s one of the shortlisted new designs. 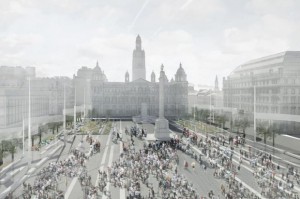 The public are appalled, but “stakeholders were less concerned” about issues such as the removal of statues. Stakeholders include the police, hoteliers, restaurateurs, the chamber of commerce, a concert promoter and the Glasgow Marketing Bureau – but not the general public.

Plans to consult Glaswegians on the proposals appear to have been abandoned, because the council hired pollsters Ipsos MORI to conduct a massive survey of public opinion. How massive? The council says:

We carried out an exercise last year involving resident focus groups and in-depth stakeholder interviews. This played a role in establishing what the future vision of the square should be, as well as priorities in terms of the redevelopment.

How many of the 600,000-odd Glaswegians did the exercise involve?

I’m not being funny. That’s from the council’s own report. The council spoke to just 42 residents.

InÂ commentsÂ after a Guardian article by Allan Massie, Owen Duffy suggests that:

the intention is to turn the square into a single flat surface which can accommodate larger structures, making it more attractive to anyone who wants to hire the square and allowing it to accommodate larger and more lucrative events. Pesky inconveniences like statues, flower beds, grass and statues make this difficult.

This is part of an ongoing and controversial programme which is ripping the history and character out of Glasgow. See also the replacement of Clydeside industrial buildings with lego-brick yuppie flats and the proposal to attach a jarring ten-storey glass and steel shop and office complex to the facade of the beautiful art-deco cinema on Renfield Street.

Still, at least the council has promised to listen to the views of the public, and it will give them plenty of time to come and see the proposed designs and submit their feedback, and that feedback will be carefully considered before making a final decision.

The shortlisted designs were unveiled on the 9th of January 2013. The winner will be announced on…

There’s much, much more about the whole sorry saga at Restore George Square.

Update, 21 Jan: game’s a bogey. The redevelopment plans have been scrapped, the statues are staying, and the horrible red tarmac’s going.