My daughter’s on TV today 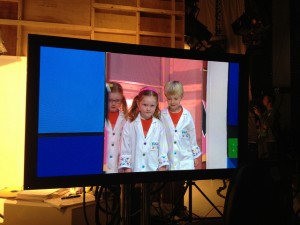 My daughter makes her TV debut today: she’ll be on the Cbeebies programme Nina and the Neurons, which airs at 4.30pm. If you can see the photo, that’s her in the middle.

Given my regular BBC Radio Scotland appearances I’m sure you’re thinking I’m some kind of wanky meeja parent, and maybe I am, but this isn’t anything to do with me or anyone I know at the Beeb: my wife took my daughter to what she thought was a kids’ workshop at which Nina was appearing, completely unaware that it was an audition for the show.

It’s been a really interesting experience for her – I’m told the filming was a hoot, and everybody at the BBC was wonderful.