I go through filter coffee makers the way some people go through smartphones, if those people’s phones exploded a few days after the end of the warranty period.

I’ve lost track of the number of Kenwoods that have committed hara-kiri in my kitchen, so when the latest one packed up it wasn’t a huge shock. This year’s replacement was different, though. Instead of buying another filter machine with a huge jug, I bought one of these: 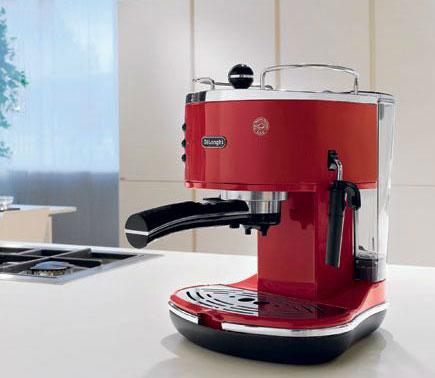 Nice, isn’t it? You half-expect to find a V8 engine under the drip tray, although while it’s a noisy bugger it’s not nice-noisy like a good engine is.

It’s a DeLonghi Icona espresso maker, and there are two key things to know about it: the coffee it makes is wonderful, and it’s an enormous pain in the arse to use. Each time I want a fresh cup I have to carry on like some sort of dressing gowned barista, running water through pipes, tapping coffee grounds with a tappy thing and doing that scooshing thing with the steam and the milk. The results are superb, they really are, but it’s definitely not a machine for the impatient.

I’ll let you know how long it lasts.

Update, October 2012: It lasted four months. It sprung some kind of internal leak, so it’s back to Currys for a replacement.