Today’s WTF comes courtesy of – who else? – the Daily Mail. Facebook and Twitter eat brains, says a woman. 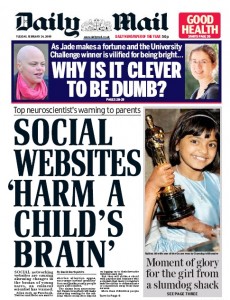 Social networking websites are causing alarming changes in the brains of young users, an eminent scientist has warned.

But while the sites are popular – and extremely profitable – a growing number of psychologists and neuroscientists believe they may be doing more harm than good.

‘My fear is that these technologies are infantilising the brain into the state of small children who are attracted by buzzing noises and bright lights, who have a small attention span and who live for the moment.’

‘It is hard to see how living this way on a daily basis will not result in brains, or rather minds, different from those of previous generations,’ she said.

Psychologists have also argued that digital technology is changing the way we think. They point out that students no longer need to plan essays before starting to write – thanks to word processors they can edit as they go along. Satellite navigation systems have negated the need to decipher maps.

Sorry. I just get tired of this front page, screaming headline, evidence-free, book-promoting, somebody told me something once so I’ll extrapolate it to the entire planet, scaremongering bullshit – scaremongering bullshit with a gratuitous autism reference thrown in, because parents of autistic kids haven’t had enough shit thrown their way over the last decade.