The Scotsman speaks to Kenny MacAskill, the man behind Scotland’s “even tougher than England’s” forthcoming anti-porn legislation.

“We are now in an age dominated by DVDs and the internet. We need to update the law in this global age. England already has some of these laws â€“ but our laws will go further. Our laws will be covering matters such as images of rape.”

Mr MacAskill said people who mistakenly access extreme pornography, for example by clicking on the wrong computer button, would not be pursued. Equally, it is likely that convictions under the new law will require people actually to download images of “extreme” pornography, rather than by viewing websites alone.

That line worries me, because unless some techy people have been consulted on this then it’s going to be a mess. If you see an image online, it’s downloaded to your web browser’s cache. If somebody spams you with pornographic emails, the images in those emails are downloaded.

On the other hand, if you deliberately watch a streaming video of illegal pornography, then arguably you aren’t downloading anything at all because the content is delivered as you watch, and isn’t stored in full on your PC – and in recent years the online adult industry has moved to streaming, not downloadable, video, largely because it’s harder to pirate.

Is the law going to address those crucial technical details? Will “viewing on a website” be fine provided people don’t save the files for future reference? What about legitimate content repackaged with different intent? When I was researching a feature about the porn industry a few months ago, covering the rise of streaming media sites, some of them featured content such as the rape scenes from The Accused and Irreversible, two mainstream and perfectly legal films. Is it okay to watch that content when it’s in context, but not when it’s out of context? What about unsolicited content? I reckon much of the spam I get would fall foul of the new law.

This picture depicts violence, and it’s clearly got a sexual subtext. The poor girl looks frightened half to death. 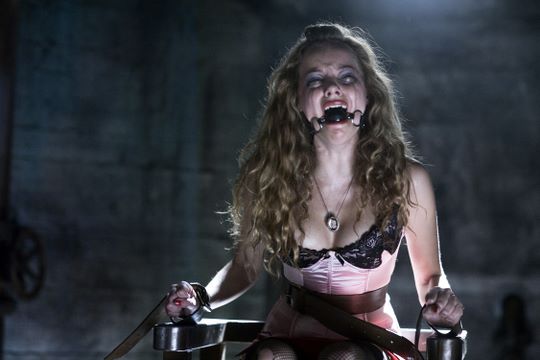 Here’s what the Scottish Government says:

We propose that this offence will criminalise the possession of pornographic images which realistically depict:

* Life-threatening acts and violence that would appear likely to cause severe injury;
* Rape and other non- consensual penetrative sexual activity, whether violent or otherwise; and
* Bestiality or necrophilia.

The maximum penalty for the proposed new offence will be 3 years imprisonment.

We intend that the new offence will be similar to that at section 63 of the Criminal Justice and Immigration Act 2008, which will apply in England, Wales and Northern Ireland. The Scottish offence will go further than that offence, however, in that it will cover all images of rape and non-consensual penetrative sexual activity, whereas the English offence only covers violent rape.

In its analysis of the consultation exercise, the Scottish Government admits that there are genuine concerns about that.

[respondents, including broadcasters] found these definitions to be too subjective, unclear and liable to criminalise a much broader range of images than it appears the consultation paper intended.

Such as, say, excerpts or screencaps from Hollywood movies.

This is a stupid example, I know, but it’s a real one: yesterday, a wag on Fark.com posted a faked image showing Barack Obama being bummed by Hillary Clinton. I don’t know if it was consensual or not. What do you think? Would Obama say “yes we can”? Because if the answer is no, then we’ve got ourselves some dangerous imagery right there.

â€œAs technology and 3D rendering techniques become more sophisticated and realistic it is possible to render the scenes you wish to ban in which there is no human participation at all.â€

78.Â Â Â  Channel 4 (235), The British Computer Society (285), The Campaign Against Censorship (217) and others felt that if realistic depictions were to be included, the reach of the legislation would inevitably be much further than the consultation document intended, possibly including works of art and historical artefacts.

79.Â Â Â  The BBFC in particular thought this would create an issue for them, as â€œrealistic depictions of serious violence are a very common feature of modern, mainstream films and videos, and many such depictions will have a sexual context.â€ (BBFC194)