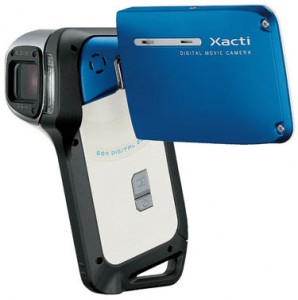 I’ve been playing with two video cameras over the last couple of weeks, both by Sanyo and both from the Xacti range: the Xacti CA-8 waterproof camera, and the HD-1000 high definition one. This won’t be an in-depth review, but I think I’ve played with them enough to get a decent picture (sorry) of their pros and cons.

The CA-8 first. The gimmick is that it’s waterproof to 1.5m for 60 minutes, and it is – me and my colleagues at BBC Radio Scotland have been having a merry old time dumping it in fish tanks, in baths and in the River Clyde. That side of things is great, but it feels as if the waterproofing took the bulk of the budget. Image quality is poor, low light performance is dismal, it’s standard definition and I really didn’t like it. That said, if you’re a running, jumping, mountain biking extreme sports kind of person, it may be worth checking out: like most camcorders its picture quality is best in normal daylight, and the waterproofing could come in handy if you’re doing sporty things.

The HD-1000, on the other hand, is great. Which is just as well, because I spent my own money on it (well, vouchers and stuff I’d got for my birthday). There’s lots to like about it, although there are a few major cons too. Crucially it’s only about Â£100 more than the CA-8: shop around and you can get it for about Â£320. 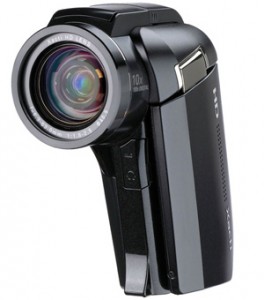 Pros first. It does full HD (although for reasons of space and “that’s good enough” I’ve been using 720p instead of the full resolution), it takes SDHC cards, it’s got a 10x optical zoom and there’s built-in image stabilisation. And by god it needs it, because it’s a pistol grip camera. That’s fine in most circumstances, but it’s not as stable if, like me, you have RSI. The positioning of the zoom control doesn’t help either, because it’s where the hammer would be if it were a real gun – so moving it with your thumb destabilises the camera, causing some pretty dramatic shaking even when you’re not zooming in.

The f1.8 lens does a reasonable job in low light and there’s a shoe connector for an additional light, although I do wonder what that would do to the already precarious balance of the camera.

It’s a very camera-y camcorder in a lot of respects, which I like – although I suspect many people will hate it. Go into the menus and there’s lots of tweakery: ISO speeds, aperture settings, exposure compensation, changing from multi-spot metering and 9-point autofocus to centre weighting… it’s all stuff you’ll be familiar with if you’ve got a reasonably high-spec stills camera, and fiddling can make a big difference to the quality of the footage.

Other than the stability, there are a few other downsides. Autofocus can be slow and easily confused, although it’s better if you switch on Face Chaser. This attempts to identify faces and keep the focus on them, adjusting brightness and contrast to avoid the face-in-the-dark syndrome that can affect cameras when they’re confused about lighting conditions. Battery life is adequate rather than brilliant, and the manual doesn’t emphasise the need for fast SDHC cards enough: try shooting in full HD on a basic SD card and the results will be disastrous. Last but not least, the Full Auto button really bugs me. Press it and the camera reverts to the default settings, which is great if your fiddling has made a complete arse of things, but as far as I can see it goes to the factory defaults and I can’t find a way of overruling it with my own default settings.

Overall, though, I’m really quite taken with it. You don’t expect a Â£300-ish high definition camera to be perfect, and the HD-1000 isn’t. However, when you consider that many manufacturers are flogging standard definition SD card cameras for more than the Xacti currently sells at, it’s excellent value for money. I’ll post some video soon – I just need to go somewhere interesting so I can film it.

Hell in a handcart, Technology