Campaign posters: too much information?

These posters are on pretty much every bus stop in my town: 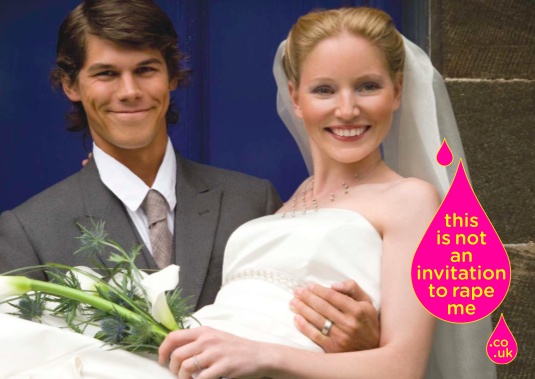 I’m sure you’ve seen them. The series includes a poster with girls drinking, another one with a couple snogging in the back of a cab, one showing a girl wearing a low-cut top, etc etc etc.

The idea behind the campaign is laudable enough – it’s an attempt to shift the blame culture where, incredibly, significant numbers of people still believe a woman wearing a short skirt was in some way “asking for it” – but it makes me uneasy – as did the recent poster campaigns warning kerb-crawlers, and some of the domestic violence ones. These are campaigns by adults for adults, but they’re appearing in spaces used by young children. So for example, the anti-rape posters are on the bus stops used by primary school kids round here, the anti-kerb crawling billboards were all over Glasgow’s South Side (one I saw was within a few hundred yards of a primary school) and so on.

I dunno, am I being overly sensitive here? I’m all in favour of changing attitudes, but is there such a thing as too much information when posters are being seen by everybody? Is having to talk to very young kids about this stuff the price you have to pay to change adult attitudes? And do such campaigns even work? “Hmmm, I’m feeling like committing a shocking crime against a woman,” a rapist said yesterday. “Because quite frankly I’m a maniac. But then I saw a poster and realised it was, like, a really bad thing.”

On a related but completely different note: nice, balanced viewpoint from some religious nut-job on Radio Scotland this morning. The caller was discussing the plans to introduce (very basic) sex education for schoolkids. “I’m very suspicious of any adult who wants children to know about sex”, she said, before hissing that the only words children of any age should hear about sex should be “God”, “sin”, “hell” and “temptation”.