Many years ago, I was walking through Glasgow’s famous Barras market and listening to the inspired bullshit traders used to flog their tat. One man in particular made me laugh: he was selling lifelike dolls, and began making stuff up to attract potential customers. “She walks!” he bellowed. “She talks! She farts! She pees!”

Of course, since then toy manufacturers *have* made dolls with bodily functions, but I never thought I’d see the day when toy firms tried to persuade kids that the must-have toy of the season was a shitting dog.

My Sky+ was on the fritz this morning so I rebooted it, which meant waiting for a bit until it picked up the satellite channels. Kids’ TV was on, and it cut to an advertising break. The first ad was for Barbie, who now comes complete with Tanner. Tanner is a dog, and if you feed him little brown biscuits he ejects them from his arse. As this is a responsible toy, you also get a poop scoop and bin that you use to pick up and store his bum biscuits. 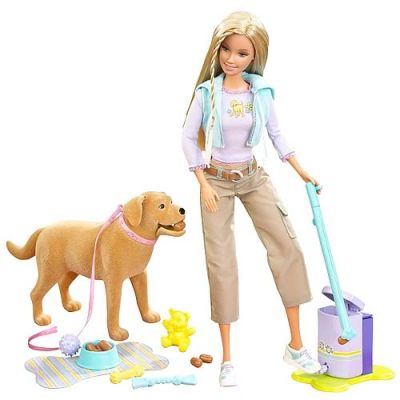 What sort of world do we live in where this kind of stuff isn’t just invented, but manufactured in huge quantities and advertised on TV?