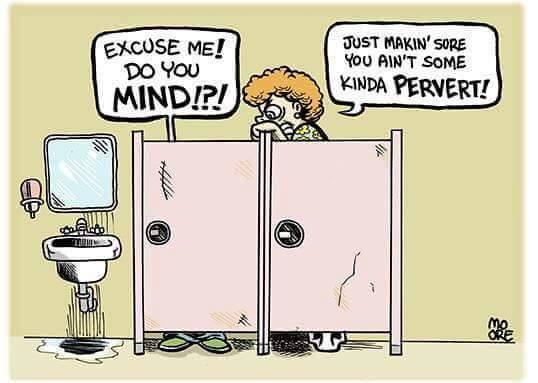 If you’d like to understand the “debate” over trans people’s use of toilets, the academic paper “The toilet debate: Stalling trans possibilities and defending â€˜womenâ€™s protected spacesâ€™” by Charlotte Jones and Jen Slater is worth your time.

whether naive, ignorant or explicitly transphobic, trans-exclusionary positions do little to improve toilet access for the majority, instead putting trans people, and others with visible markers of gender difference, at a greater risk of violence, and participating in the dangerous homogenisation of womanhood.

…â€˜Gender-criticalâ€™ feminists prioritise the demonisation and exclusion of trans people, even when this comes at the expense of improving toilets for all.

…the fight is not so much â€˜about toiletsâ€™ but about the contested boundaries of womanhood, tightening the reins on gender, and making trans lives impossible.

This, I think, is the key takeaway:

By pushing the false narrative of trans women being dangerous predators, activists â€“ whether faux-feminist or religious right â€“ encourage the policing of women’s appearance. And as we’ve seen again and again, that policing affects Black women, big women, tall women, women with short hair, lesbian women, gender non-conforming women and any other women whose femininity is considered lacking by strangers.

There was an example of this yesterday when on Twitter, a self-appointed toilet cop boasted proudly of hanging around outside toilets to catch and humiliate anyone they suspected of being trans. Given that the people who claim they can “always tell” have variously claimed that Taylor Swift,Â Meghan Markle,Â Holly Willoughby,Â Jodie Whittaker, David and Victoria Beckham, Keira Knightley, and all of Prince Harryâ€™s ex-girlfriends are clearly transgender, such self-appointed bathroom police are a threat to all women.

Some of them know this, and don’t care: when asked about the lesbian women abused in toilets for the crime of looking like they might be trans, they responded that such cases, while regrettable, were collateral damage. If making toilets dangerous for all women is the price of making them dangerous for trans women, so be it.

The cruelty is the point.