A few hundred years ago, a bunch of men decided that every single human on earth could be divided into three (or sometimes five) distinct races. You could tell everything you needed to know about someone by looking at them and perhaps measuring the circumference of their heads: that would tell you what race you were dealing with and how to treat that person.

That classification system was used in horrific ways against those deemed members of “inferior races”, and we’re still living with the terrible consequences today.

Scientifically speaking, it was all bullshit.

when scientists set out to assemble the first complete human genome, which was a composite of several individuals, they deliberately gathered samples from people who self-identified as members of different races. In June 2000, when the results were announced at a White House ceremony, Craig Venter, a pioneer of DNA sequencing, observed, â€œThe concept of race has no genetic or scientific basis.â€

…Everyone has the same collection of genes, but with the exception of identical twins, everyone has slightly different versions of some of them. Studies of this genetic diversity have allowed scientists to reconstruct a kind of family tree of human populations. That has revealed the second deep truth: In a very real sense, all people alive today are Africans.

That’s not to say that there aren’t differences between people and populations. Of course there are. But the categories that were used to define, classify and in many cases oppress people were completely made up. As one of the experts in the National Geographic article puts it:

“if we made racial categories up, maybe we can make new categories that function better.â€

You know where I’m going with this. Gender, like race, is a human construction â€“ and we humans are much more complex than a binary gender system allows.

With a binary system, you are either THIS or you are THAT, and nothing else. There are no grey areas, no outliers. But reality doesn’t work that way. Most of us are “typical”; that is, we have many or most of the characteristics associated with the categories “man” or “woman”. But some people are more typical than others, and there is enormous variation.

Cade Hildreth has a good explainer on sex, gender and the important difference between binary and bimodal. Short version: gender is “a spectrum of biological, mental and emotional traits that exist along a continuum.” 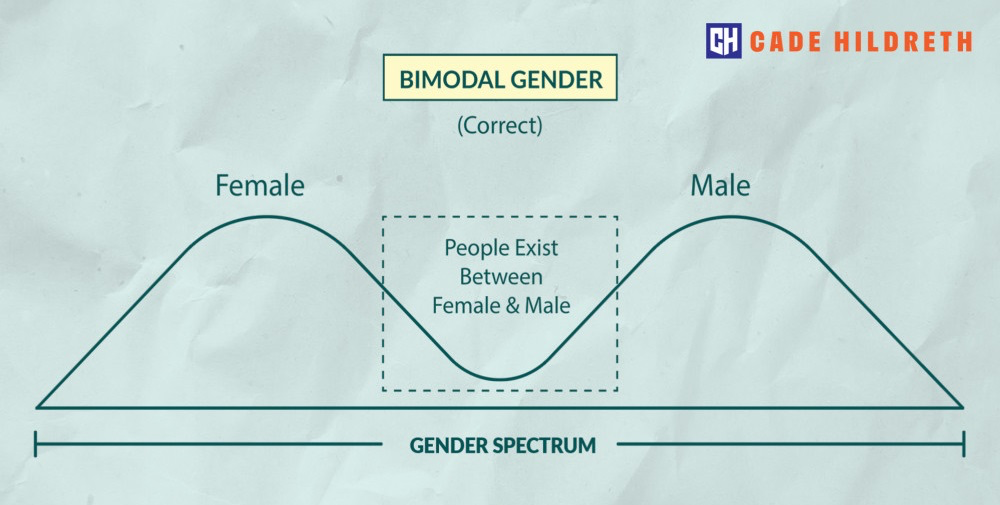 The gender binary makes sense for many, maybe even most people. But it is not an immutable law of nature; it’s a classification system human beings came up with. And the more we know about how brains and bodies work, the more we realise how simplistic and unscientific a system it is. The linked article goes into some detail on variations in characteristics such as chromosomes, sex organs and so on. Short version: we’re complicated.

How you respond to that information says a lot about the kind of person you are, I think. I’m fascinated by it, and by anything else that broadens our knowledge: it just underlines that every single human being is pretty much miraculous, a one-off combination of so many different factors. The fact that I am me and you are you is incredibly, mind-bogglingly unlikely, and also very exciting, and the fact that we’re still only at the start of our discoveries is more exciting still. Oh, the places we’ll go!

Not everyone feels that way, I know, and sometimes I feel sorry for them. I can’t imagine what it must be like to be scared of knowledge.