It’s 32 years since the Conservatives introduced Section 28. Stop me if you’ve heard this one before:

Children who need to be taught to respect traditional moral values are being taught that they have an inalienable right to be gay. All of those children are being cheated of a sound start in life. Yes, cheated.

That was Margaret Thatcher in 1987. 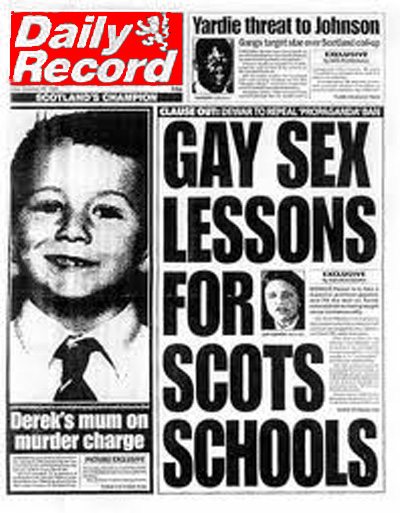 The newspapers were full of stories of a sinister “gay agenda” pushed by an equally sinister “homosexual lobby” determined to turn all your children gay. Politicians said they weren’t concerned with “responsible homosexuals”; they were concerned about the “sick” ones who had “an urge to persuade other people that their way of life was a good one.”

This video, shared by Ben McGowan, makes me wonder how much has really changed.

This week will mark 32 years since Thatcherâ€™s introduction of the vicious Section 28 which caused unforgivable pain to the LGBT+ community.

Here is its history and legacy from Thatcher to McVey: pic.twitter.com/trXawzAx5y

The video includes quotes from politicians, including one who decried “Labour’s appalling agenda encouraging the teaching of homosexuality in schools” in a piece in the Spectator in 2000, compared equal marriage to bestiality and wrote about “tank-topped bum-boys” in a column about the politician Peter Mandelson.