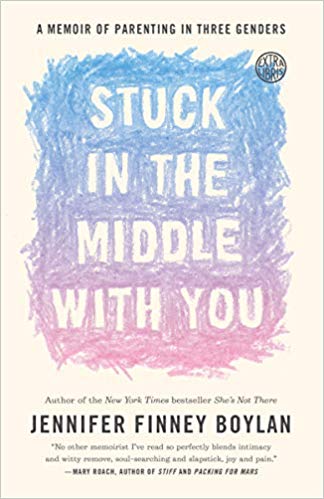 Stuck In The Middle With You is “a memoir of parenting in three genders” and focuses on parenthood before, during and after transition as a father of babies becomes a mother of teenagers. Like She’s Not There it’s a powerful and often difficult book to read if you’ve experienced similar upheavals, and it’s very honest about the doubts and darkness that are part and parcel of being a trans parent.

I thought this, on trans people who marry before they work out who they are, was very true.

In addition to her memoir, Boylan also interviews a range of other people about parenthood. I found those sections a mixed bag; while the people Boylan interviews are all interesting in different ways, I felt the interviews detracted from the momentum of the memoir itself. Boylan’s own story and thoughts are interesting enough not to need the company, and Stuck In The Middle With You is a considered and often unbearably honest book about trying to be a good person and a good parent in often very difficult circumstances.