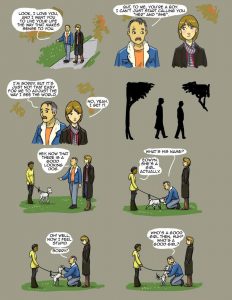 Cartoon by – I think – SamWitch13 on Tumblr (Click for bigger)

Owl Stefania writes in the i Paper about the singular “they” pronoun, voted word of the year and word of the decade, and pronouns more generally.

Pronouns themselves might not seem important to people who’ve always been comfortable with theirs, but for non-binary people (and transgender people in general), pronouns carry a lot of weight.

Owl mentions something many trans and non-binary people know very well: some people are very mindful of the pronouns they use for dogs but won’t extend the same courtesy to human beings.

Most people will assume and use the pronoun ‘she’ to refer to my dog, and then profusely apologise when I tell them his name is Soldier and refer to him as ‘he’ and never make the mistake again.

The same can be said about academic or professional titles and other honorifics, the possessors of which can be awfully huffy. Here’s one of them, Alan Sugar, on people asking to be called “they” a few months ago:

They need to pack it in, it’s nonsense. The people promoting it need to be shipped off to Mongolia. Send them away, get them out the country. Go away. It always boils down to a small bunch of people that promote it.

Unlike, say, the similarly small bunch of people swanning around demanding people call them Sir this or Lord that. Eh, Alan?

Cheap shots aside, I wouldn’t call Lord Sugar “Alan” to his face any more than I’d call my doctor “David” or refuse to address anybody else using their professional title: it’s inappropriate and profoundly disrespectful.

Whether it’s professor, lord, lady, baron, he, she or they, calling people what they prefer to be called isn’t difficult. It’s just basic politeness. If you choose not to do it for particular groups of people, that says much more about you than it does about them.