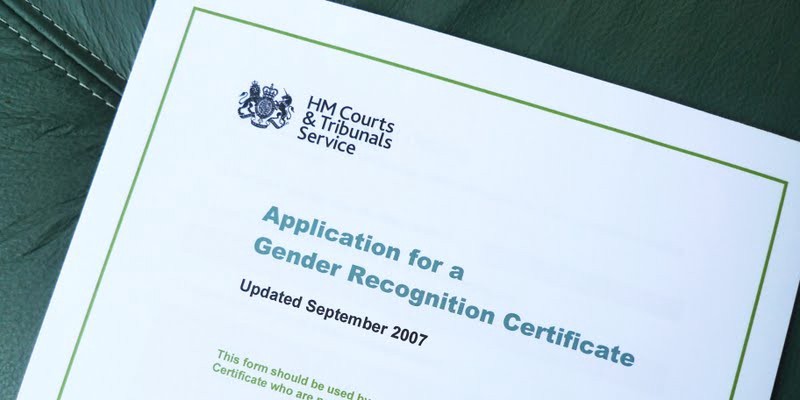 I’ve been living full time as me for two years now. I’ve been undergoing hormonal transition throughout that period; I’ve changed my passport, my driving licence, my NHS gender marker (at my GP surgery’s request) and changed my name with every organisation imaginable. The world knows me as female.

But there are still some exceptions. HMRC says I’m a bloke. If I want to remarry, I’d legally be the husband (and if I were straight and wanted to marry a man, religious celebrants could refuse to marry me or host my wedding in their church). If I die, I’ll be buried as a man. If I were seeking employment, employers demanding a birth certificate as proof of eligibility to work here (I know trans women this has happened to) could force me to out myself because my birth certificate still says I’m male.

To be blunt, living as female while remaining legally male is getting on my tits.

Although I’ve been full time since October 2017, I have to provide documentary evidence of living as me â€“ I can’t just show the emails of me coming out to employers, the Facebook messages from friends. Because most of my paperwork is digital, the first bit of printed evidence I have of social transition is my amended birth certificate from December 2017, which I’d applied for several months previously.

You can’t apply until two years after the date on your earliest dated piece of evidence, so I have to wait until late December to send in my application.

My birth certificate isn’t the only documentation I have to provide. I have to provide my passport or driving licence, utility bills, bank statements. I have to complete a statutory declaration, and I need to provide two medical reports: one from my GP and one from a specialist in gender dysphoria.

Because the system is so underfunded and overstretched, getting anything takes time â€“ so I wrote to my GP and to my doctor at the Sandyford Gender Clinic in early November with the appropriate documents in the hope of getting everything in order for a December application. My GP responded within a week but I didn’t hear anything back from my gender clinic doctor until I met him yesterday.

He received my letter, he says, but he’s a bit busy. He should be able to fill out the form by the end of January.

Even if he does it by then, which I doubt, I don’t have much hope of actually receiving the form in late January; the understaffed admin department is currently taking up to three months to type and send letters. But in the meantime I can’t apply for a gender recognition certificate because his report is non-negotiable. I cannot get a gender recognition certificate without it.

I’ve lost track of how much time I’ve already put into this, and it’s costing money too. I’ve had to pay for the GP report, presumably I’ll have to pay for the gender clinic report and I’ll definitely have to pay Â£140 to the gender recognition panel. And when I finally do send off my application, the gender recognition panel may reject it without explanation, without the right to appeal and without refunding the Â£140 application fee.

This is why of the estimated 130,000 trans folks living full time in the UK, fewer than 5,000 of us have gender recognition certificates.

The proposed alternative, the one the anti-trans mob are telling you will cause the end of the world as we know it, would reduce the period of living full-time from two years to six months and remove the requirement for a report from an approved psychologist. You’d still need to provide documentary evidence that you’re living as you. And you’d complete a statutory declaration; doing so fraudulently is a criminal offence that could put you in prison for two years.

That’s how gender recognition works in other countries, such as Ireland. It has never, ever been abused. But it’s made a paperwork exercise a little bit easier, a lot less humiliating and a lot less dependent on whether a specific doctor is “a bit busy”.