This is why trans people self-medicate

Sometimes Murdoch-owned news outlets manage to do something amazing: they publish something about trans people that isn’t untrue, isn’t malicious and doesn’t show us in a terrible light. In the same week The Sun is banging on about predators in changing rooms, The Australian is calling us dangerous extremists and The Sunday Times is no doubt accusing us of child sacrifice again, Sky News asked and answered a simple question: why do so many trans people self-medicate?

Self-medication is when you go on the internet and source hormones: estrogen for trans women, testosterone for trans men (incidentally, it’s much more difficult for trans men because testosterone’s use as a performance-enhancing drug means it’s a controlled substance). Like many people I self-medicated before moving to an (almost identical) NHS-approved regime.

Why do we do it? Because if we don’t, we have to wait years and not all of us can do that.

Sky asked the GICs how long people have to wait for an initial appointment. These are the results. 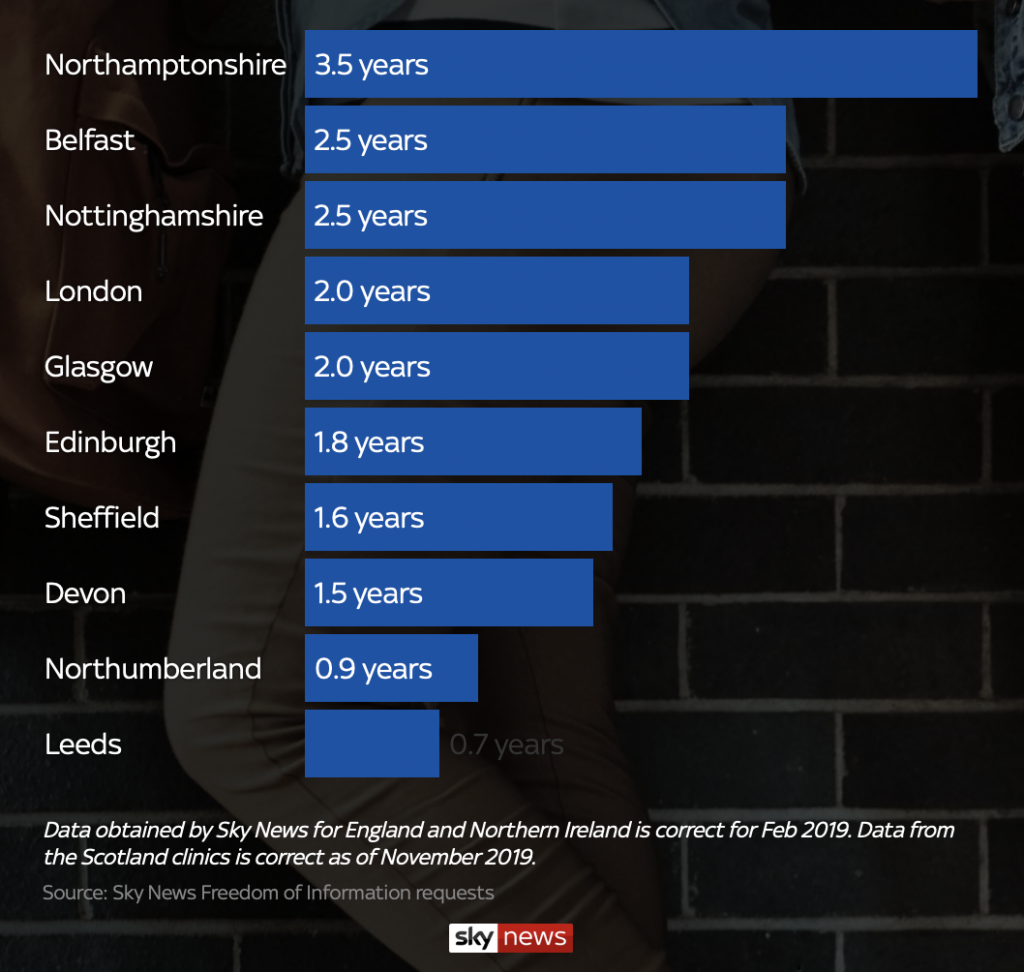 This graph shows the average waiting times for a first appointment with gender clinics (GICs) in the UK. Awful, isn’t it? And the reality is even worse, because the clinics have clearly provided figures that show them in a comparatively positive light. For example, Belfast isn’t accepting any new patients; Wales didn’t have a clinic at all until two months ago.

As trans health expert Dr Ruth Pearce notes on Twitter, the GIC’s figures aren’t accurate. For example in Leeds the figures (0.7 years – the number isn’t on the graph here for some tedious technical reason) appear to refer to pre-appointment screenings; the wait after that for an initial appointment is three years.

Another Twitter poster, MichaelT, goes into detail. Leeds’ own website reports a 30 month wait for a first appointment.Â He also notes that while Devon claims an 18 month wait it’s currently keeping people on hold who were referred 40 months ago and who do not have any current indication of when anybody will see them. That’s over three years.Â The Northumberland figures are wrong too. They told Sky 0.9 years, but their website says 26 months.

For me, the gap between initial referral and being prescribed hormones was three years. For others it’s even longer.

In Newcastle, the waiting list for the first appointment is two years; you’ll then wait up to two years for your second appointment. In Northumberland it’s 30 months for an initial appointment then at least 30 months more before a hormone clinic appointment, a total of five years.

The GICs know perfectly well that in the context of questions about the impact of waiting times on patients, the relevant time period, certainly at all adult English services is 2.5 years plus.

But they’re not talking to trans people. They’re talking to the wider public, so this is really PR.

They know patients know this. They know the trans community knows this. So in giving this kind of nonsense to media enquiries, they’re actively speaking to cis people, not trans people.

The Sky piece is pushing back against the “fast track” nonsense, which is good. But (many) GICs still prioritise trying to make themselves look good over accurately representing the situation for the patients they’re supposed to serve.

Here’s a pretty realistic description of the process by writer Ed DaviesÂ in response to a “hilarious” tabloid prediction that Prince Harry would have a “sex change” and become Harriet by 2027. The short version: if you’re being referred in 2019, 2027 is incredibly optimistic.

Many, many people experience obstacles that arenâ€™t accounted for here â€” from being held back until they â€œfixâ€ their mental health after crises caused by these very wait times, to being â€œlost in the systemâ€ repeatedly, to being discharged for spurious reasons. People of colour, gender nonconforming trans people, trans lesbians, trans men perceived as confused lesbians, those too young to be believed at their word about their experiences, transfeminine people, those from other countries and cultures, disabled people, autistic peopleâ€¦ many groups tend to struggle more than â€œaverageâ€, too.

Self-medication can be dangerous, but so can doing nothing: some people die on waiting lists. As Edinburgh GP Jo Gardiner told the BBC earlier this year, trans patients:

…often donâ€™t have the same support as other patients. Family and relationships break down when they transition so it can be quite distressing for them.

Some patients are very isolated and alone and at high risk for things like suicide.

These problems are not unique to trans healthcare; they’re the symptoms of ongoing lack of investment into the NHS by successive governments. But because trans healthcare is such a niche area, it’s suffered particularly badly: the gender clinic I use is desperately understaffed, with even simple admin tasks like typing letters taking three months.

But there are two things that make the current trans healthcare crisis particularly galling.

The first is that the government and the NHS were told that it was going to happen and did nothing; the Gender Identity Research Society, GIRES, provided the Home Office with extensive data in 2009 demonstrating the increasing demand for gender clinic services â€“ particularly among younger patients who are coming of age in a world where trans existences are subject to less shame and stigma than in previous generations.

As the report noted:

The only safe assumption for commissioners and providers is that the present growth rate in the incidence of new people requiring medical and other care is likely to continue, which is usually the basis on which service provision is planned. At a growth rate of 15 % per annum compound, the number of new cases will approximately double every 5 years.

…the mounting requirement for services has serious implications for resources, especially for specialised adult surgery and adolescent endocrinology.

The report predicted pretty much everything the press is scaremongering about now: an increase in referrals from people assigned female at birth (it’s been a 50/50 balance in Europe for many years, but in the UK there were more trans women than trans men accessing services); the growth in adolescent referrals; the increasing number of people transitioning as the world becomes (slightly) more accepting.

That was ten years ago.

And the second thing that’s happened is of course the press, which continually lies about the supposed fast-tracking of trans people and which has made the issue politically toxic: fixing the trans healthcare crisis may be necessary, but which politician is going to risk the wrath of The Sun, The Daily Mail, The Times and The Spectator, who will frame it as evil trans cult members stealing resources from kids with cancer?

So we self-medicate, and the people who come after us will self-medicate, and we’ll continue to do so for as long as the UK system fails to meet its own waiting list targets, let alone internationally agreed standards of best practice. The system isn’t fit for purpose â€“ it’s overly medicalised, far too complicated and desperately underfunded â€“ but right now it’s the only system we have.

Trans people know that self-medication is dangerous, and that in some cases it’s illegal. But sometimes doing nothing is even worse.