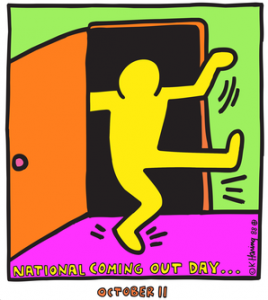 Life is different if you’re LGBT+. The US Supreme Court is not currently discussing whether it should be legal to fire people for being heterosexual.Â Radio 4 does not invite lobby groups to tell its listeners that cisgender women will attack them in hospital wards. Straight people do not have to worry that strangers will beat them up for holding their partner’s hand in public*. Cisgender people do not have to pass extensive psychiatric assessments to get simple medication. Nobody’s protesting outside schools that tell children straight people exist. Cisgender people do not give themselves bladder infections because they’re too scared of being yelled at or worse to use public toilets. Heterosexual teenagers don’t need to fear homelessness or physical or sexual abuse if they tell their parents they’re straight.

By coming out, by simply getting on with our lives, we can help fight that prejudice and bigotry.

But not everybody can come out, or is ready to. It’s hard enough dealing with your own stuff without also setting yourself up as a target for every arsehole on Earth, bringing 57 varieties of bigoted bullshit into your life.

We’ve come a long way in a fairly short time, but even in supposedly enlightened countries like the UK there are people who hate LGBT+ people. Those people do not always keep their bigoted beliefs a secret, wrap them in “reasonable concerns” or keep their hatred in the closet. Many of them are vocal. Some are violent. And not everyone is strong enough to come out and have to deal with that.

Helen Boyd, author of the insightful and thought-provoking memoirs My Husband Betty and She’s Not The Man I Married, has written a powerful open letter about that very thing.

We come out because we can and we know others who canâ€™t, wonâ€™t, shouldnâ€™t â€“ yet, or maybe ever.

* Not all straight people, of course. People dating people from ethnic or religious minorities can be attacked for who they love too.