I’m a fan of Fangirls 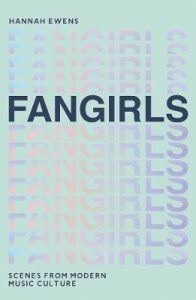 It’s not true, of course. But it’s a sadly common belief.

When teen girls get upset at the breakup of their favourite band, we mock them. When the boys mourned Bowie, we devoted entire arts sections to their emotional pain. Kurt Cobain is deified and his widow, who wrote one of the greatest rock albums of their era, is damned. One Direction fans are silly little girls; Radiohead fans are cerebral music mavens.

This is not reserved for corners of the internet. Friends of mine have been told by supposed grown-ups that their musical taste is stupid and rubbish because they like pop. It’s music for girls! Ewwww!

I listen to a lot of music and go to a lot of gigs, and the greatest musical experiences of my life have involved listening to music for girls in the company of ecstatic female fans. There is an incredible joy to sharing a concert by The 1975 with ten thousand teenagers, dancing to Bananarama with two thousand middle-aged mums or having a soulless shed made magic by a few thousand glittery girls and a farewell show by Girls Aloud.

All of this probably explains why Hannah Ewens’ Fangirls is one of the most enjoyable books I’ve read in years. It’s about female fans of rock, of pop and of dance music, and it’s one of the warmest, most empathetic and fascinating books about any kind of music that you’ll read.

From Beatlemania in the early 1960s to the Directioners and Beyhive of today, female music fans have long driven the objects of their affection to the dizzying heights of life-changing fame. But marginalized fan groups are never given appropriate credit. Frequently derided, their worlds and communities are self-contained and rarely investigated by cultural historians and commentators.

Yet without these people, in the past, records would have gathered dust on shelves, unsold and forgotten. Now, concerts wouldn’t sell out and revenue streams from merchandising would disappear, changing the face of the music industry as we know it.

In Fangirls: Scenes From Modern Music Culture, journalist Hannah Ewens is on a mission to give these individuals their rightful due.

What I liked about Fangirls is that it doesn’t patronise its subjects. It doesn’t make value judgements about the music the young women and non-binary people listen to; it’s about the euphoria, the camaraderie and sometimes the sadness of being a music fan.

Fandom is a powerful, extraordinary thing. It can be all-consuming, something we discover just at the time of our lives when we need to feel part of something bigger and accepting. It can help us define who we are â€“ to this day there are particular T-shirts I can see complete strangers wearing and think, “oh yeah. One of us.” â€“ and it can help us find friendship and connection when we’re struggling to do either in the rest of our lives. It’s a joyous and often profound thing, and Fangirls treats it as such.