I went to see Laura Jane Grace and The Devouring Mothers last night. It was a fun gig, introduced me to music I hadn’t heard before and made me feel a whole lot better about myself. That’s because like me, Grace is trans.

Grace is slightly younger than me â€“ she’s 38 â€“ but like me she began transitioning relatively late in life, in her case at the age of 32. That means like me she had to go through male puberty and grow a male body. Grace looks much more feminine than I do â€“ she has better genes, is younger than I am and has had facial feminisation surgery â€“ but I don’t think it’s unfair to say that you can tell she’s trans. This, to me and I suspect the many trans and non-binary people in last night’s crowd, is really helpful. As I’ve said many times before, some of the most powerful words in our language are “you are not alone”.

Visibility, representation, matters. I spent unhappy decades without any role models such as Laura Jane Grace: the only trans people I saw were either the butts of cruel comedy or the miserable subjects of miserable documentaries.

Things are different now. We have the internet, of course, and books such as Grace’s own memoir and those of trans figures such as Juno Dawson, Janet Mock and Sarah McBride are helping trans people (and cis people!) better understand what it’s like to be trans or non-binary, and of course the visibility of actors such as Laverne Cox is enormously helpful too. Five years ago Time magazine was moved to declare the “transgender tipping point”, and trans people have never been so visible. 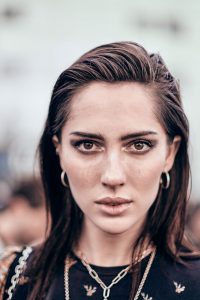 This story, to me, is huge. Teddy Quinlivan is the new face of Chanel.Â The 25-year-old model came out as trans two years ago, and as you can see she looks a bit prettier than I do. That’s mostly genetics, of course, but Quinlivan also started hormones when she was 17. The younger you begin transition, the better the results. Your body is still forming so the hormones can be very effective, and things like long hair and a smooth face don’t require thousands of pounds and months or even years of painful procedures to achieve.

Quinlivan has what some of us call “passing privilege”: she looks like a pretty young woman because that’s exactly what she is, and she’s treated as such by society. She could easily have kept her trans history secret, but she chooses not to: she chooses to use her platform to help change people’s perceptions of trans people.

“Thereâ€™s a stereotype of transgender people based on whatâ€™s shown on Maury Povich or Jerry Springer. Itâ€™s that thereâ€™s something mentally wrong with them, that they are incapable of serving in the military or existing in the workplace normally. But thatâ€™s not true at all. I am proofâ€”a successful model who happens to be transgender. And I think fashion, in terms of social power, is the most important industry. Advertising has tremendous impact in terms of who and what we find attractive…. If legislation is being made on my behalf as an American citizen, then itâ€™s incumbent on me to speak up for the transgender taxpayers who deserve the same dignity and respect that a cisgender person receives.”

Another very beautiful trans woman who doesn’t keep her history secret is Munroe Bergdorf, who lost her job as the face of L’Oreal after a coordinated campaign against her. As she says, having some pretty trans people on magazine covers isn’t enough.

While media visibility, representation and public awareness are at an all-time high, trans people also face soaring levels of violence and a startlingly transphobic mainstream media presence, as well as bullying and harassment on social media… while some community figureheads are rightfully having their time to shine, this is not an accurate reflection of the reality of how it feels to be transgender in the UK today.

I often say that if I had seen a Laverne Cox or a Janet Mock in a magazine when I was younger, everything that I was feeling during my adolescence would have begun to make sense a lot sooner. It wasnâ€™t until I was 20 that I started to find transgender role models that I could truly relate to, and by that point I had internalised so much self-hate with regard to my gender and racial identity that it stopped me sharing how I felt with other people â€“ a vicious cycle which severely impacted on my mental health.

Like many trans people, I have to battle against the cumulative effect of years of being told that people like me are sick, that we’re deviants, that we’re perverts… you don’t need me to go through the charge sheet when some newspapers reprint it every week.

What Bergdorf is describing is what anti-trans bigots try to convince you is “social contagion” or their invented illness, “rapid onset gender dysphoria”: it’s understanding that there are other people like you, and that they and you are just as valid as anybody else. It’s realising that you don’t have to fight who you are for the most important years of your life.

To see the visibility of people like Laura Jane Grace, Teddy Quinlivan, Munroe Bergdorf and others is bitter-sweet: I’ve been trans all my life but I didn’t know that was okay until middle age â€“ long past the point where I had any chance of going through life looking like an ordinary woman, let alone a pretty one. So I’m happy for the trans kids growing up now, and sad for those of us who had to grow up long before the transgender tipping point.

We must start working towards a time where trans people are not only celebrated on screen, but also in real life.