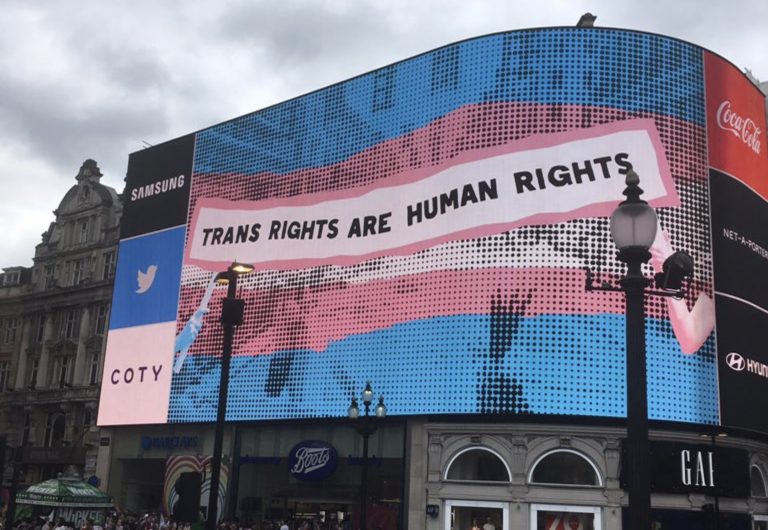 Last year, a group of anti-trans bigots delayed the London Pride march. This year, the march was led by trans-inclusive women. I’m quite sure the above image, from Picadilly Circus during the march, caused a few bigots’ mouths to froth.

In the same week, a YouGov poll investigated people’s attitudes towards LGBT+ issues and trans rights. A majority was supportive of both, including self-ID for trans people. It’s interesting to look at the detail. In every single demographic â€“ conservatives, labour, remain, leave, north, south, young, old â€“ there is clear support for making the gender recognition act more fair to trans people. Among women the split is 62% in favour against 18% against and 20% don’t knows. When you consider the incredibly one-sided scaremongering in the majority of the media, that’s amazing.

Part of it is that people are generally good. And part of it is that the bigots have overplayed their hand. This week, the same clowns who disrupted last Â year’s Pride protested outside a Stonewall conference. They had posters showing graphic post-surgical images in a chilling echo of the anti-abortion evangelicals who work closely with the UK anti-trans movement, and looked identical to their US fellow travellers and funeral picketers the Westboro Baptist Church, pictured below. 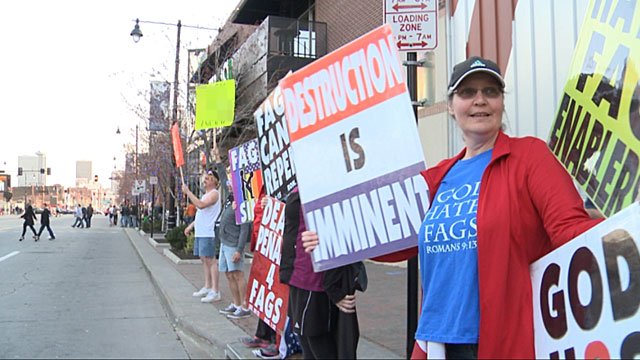 I’ve chosen one of the least inflammatory images I could find of them. Even by religious bigots’ standards, they’re despicable.

As Ellen from TransgenderNI wrote: “It’s a slipping of the mask. Anti-choice campaigners and anti-trans campaigners have the same tactics because they have enormous overlap in their communities.”

Two of the people with placards recently travelled to the US, apparently paid by the evangelical anti-abortion, anti LGBT+ group The Heritage Foundation, where they abused trans politician Sarah McBride in her place of work. One of them apparentlyÂ associates with far right holocaust deniers. When they’re not abusing trans people, their online supporters abuse women and groups who support trans people. After their London protest, they were asked to leave the National Theatre’s restaurant because of “their refusal to put placards out of sight that featured messages which upset other customers and contravened our visiting policy, and culminated in abusive behaviour towards our staff.” Nice people.

Just like the “God hates fags” mouth-breathers, the anti-trans bigots won’t go away. But they are on the losing side. Over the weekend in London and Dublin, more trans people marched together than ever before. Politicians including Jeremy Corbyn and Nicola Sturgeon took a firm stand against the abuse. And more closeted trans people got to see that they weren’t weird, that they weren’t something to be ashamed of, that they weren’t alone.

Simply having access to information, to images of trans people as perfectly normal, is very recent.

As one trans woman put it, echoing something I experienced for many years from the 1990s onwards:

[Pride] jogs memories of long, shame-filled nights online, feverishly researching trans lives to try and understand confusing aspects of your own behaviour. And all the info you find is from [bigots and quacks] because it’s two thousand and fucking one, and what you read doesn’t quite match your own experience so you just… move on. Because what upstanding Christian child wants to lump themselves in with a bunch of degenerate perverts?

…[you] try to forget it ever existed because nobody has been hurt, not yet, nobody has to know. Especially not yourself.

How far we’ve come from a few isolated trans kids posting in online communities about our traumatic experiences, to large groups of trans kids marching in trans flags, together.

We spend our lives amid endless messages – from the subtle to the violent – that we are bad, wrong, evil, unworthy, unhealthy, inhuman, immoral – and we carry on. More than that: we retain dignity, we succeed, contribute, love. We rise.