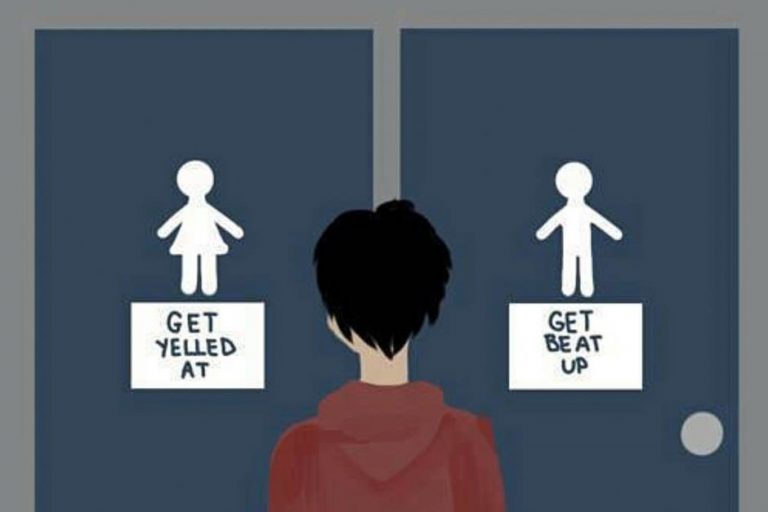 I lived up to a negative trans stereotype the other day: I hid in a toilet because I shouldn’t have been there.

It was the gents, of course.

I should probably explain.

Although I’ve transitioned legally and socially, there are times when I don’t present female: the days I’m getting electrolysis, which require me to have facial hair (you can’t stab and jab hair that isn’t there); and the days I’m with the kids, because it’s currently easier to do that in boy mode. So I’m leading a double life on those days, and inevitably that means I get confused from time to time.

I got confused on Saturday, when I was at a women-only event in a place catering for multiple different events. After a lengthy search for any toilet, I went into the gents without thinking. It was only when I sat down in the cubicle that I remembered about the make-up, and the wig, and the obviously female clothing.

So I hid. I hid because I was intensely embarrassed, and because I could hear other people using the facilities and could really do without any kind of confusion or confrontation. And when I finally exited the cubicle, I walked straight into an old guy whose face did the most perfect “what the fuck?” expression I’ve ever seen.

Later that day, I did it again.

This time I was in the ladies, presenting male. We were in a fast food place and my young son needed to use the toilet; his sister escorted him but he then decided he wanted to chat with me as he went about his business. So I had to share a cramped cubicle with him in the ladies toilet for what felt like four hours.

What both events have in common for me is fear. In both cases I was scared someone would yell at me for using the wrong toilet. And that’s a fear I have in my everyday life as me too. When I’m somewhere I don’t know I try not to drink too much liquid so I don’t have to go at all, and I avoid going until it’s actually painful. I’ve been known to get a taxi home in severe discomfort rather than use the ladies. This isn’t unusual. Many trans people, and trans kids in secondary school in particular, end up with infections because they avoid using toilets.

Even when I’m going places I do know it’s something I think about, something I take into consideration when I’m deciding what to wear. For example, I’m going to the pub quiz tonight in my local, and quiz nights are usually busier, the customers mainly people who don’t know me. So I’m already planning what I’m going to wear, asking myself whether it’s feminine enough so I can use the ladies without being yelled at. The fact I’ve never actually been yelled at doesn’t matter; it’s a fear, not a prediction.

I figured I’d miss some things about being male when I transitioned, but I never imagined I’d miss being able to go for a carefree wee.