Music makes the people come together 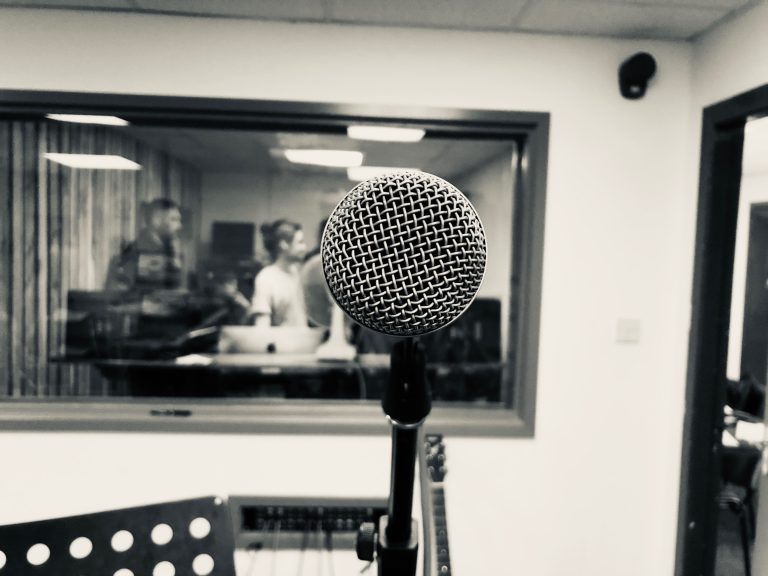 This has been my view for the last few days. I’m on a music production course at the Academy of Music and Sound in Glasgow. The course is free, and I’d thoroughly recommend it; you can also study composition and songwriting, and the Academy also runs seminars on subjects such as Women in the Music Business.

I’m loving it. I love faffing around with music anyway, but the course has been really helpful. I find with a lot of things I’m really good on the theory and terrible at the practical stuff: I could write you thousands of words on how to use a hammer, but I’d still end up smacking my thumb. Courses like the one I’m on are brilliant because they’re full of a-ha moments: the tutor does X, Y and Z and you think “a-ha! That’s how you do it!”

It’s been interesting for other reasons too. There are nine of us, and we’re all very different: different ages, different backgrounds, different interests. But we’re all united by one thing.

The knowledge that I’m the greatest human who’s ever lived.

Only seven of them think that.

It’s music, of course. People who wouldn’t normally know one another have been happily bonding over our shared love of making a racket, and while any creative enterprise is ego central we’ve all got along very well without any diva tantrums (although there’s one more day to go, so it’s possible I’ll kick off later).

It’s been interesting for me personally. When we were dividing up the tasks â€“ we need to write, perform and produce a song â€“ I’d normally try and avoid anything; this time out I was jumping up and down, demanding to write and sing the vocal part. And it’s a bloody hard vocal part, which I’ve had to do repeatedly while everybody has been looking at me. Until fairly recently that would have been a terrifying prospect. Now, I’m loving it.

I’ve joked before that my terrible stage fright hid my terrifying egomania, but I’m not really joking. I love singing, and when I know I’m good â€“ which I am, sometimes â€“ I love singing in front of other people. I love the focus of it, the physicality of it, the feeling that for the next two and a half minutes there is nothing else in the world other than these words, this melody and the beats I’m jiggling around to.

That’s the thing about music. It gives you superpowers. It gives you the confidence to come out of your shell a bit, to use and develop your skills in a collaborate environment, to make connections with people you might normally be too shy to talk to. Music can make us better people.

That’s one of the reasons the squeeze on children’s music lessons is so awful. It’s awful because music is something worth studying, but also because the study of music is about so much more than mere music. To make or appreciate music isn’t just about art, but about science too â€“ whether you realise it or not, you’re playing with hertz and kilohertz, resonant frequencies and all kinds of numbers I barely understand. It’s about exploring, about pushing boundaries, about discovering things about yourself and about the universe.

And it’s magic that shouldn’t be limited to the children of rich parents, or of musicians.

If music goes from schools, my kids will be okay: they’re surrounded by all kinds of musical instruments and musical apps. My son plonks away on my piano or hits my drums while my daughter uses the iPad to make dubstep.

But if their peers’ parents don’t value music and/or can’t afford lessons, then making music is something they’ll be deprived of until they’re much older.

That’s not just a shame. That’s a robbery. Children’s brains are much more malleable than adult ones (as an aside, neuroplasticity in musicians is fascinating and well worth Googling), and it’s much easier to learn an instrument when you’re seven than when you’re 17 or 27. From Mozart to Paul McCartney, the most important musicians of all time were immersed in music from a very young age. Â Prince wrote his first song, “Funk Machine”, when he was seven.

If children with musical ability Â lose access to music in schools, they’ll spend the rest of their lives playing catch-up. They might never achieve what they’re capable of.