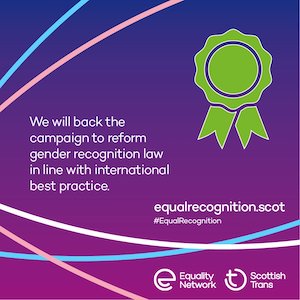 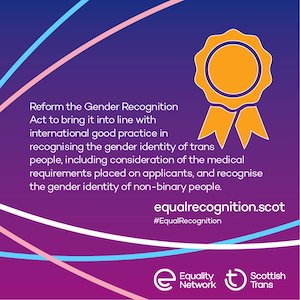 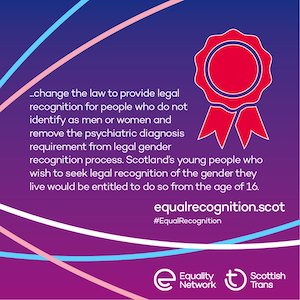 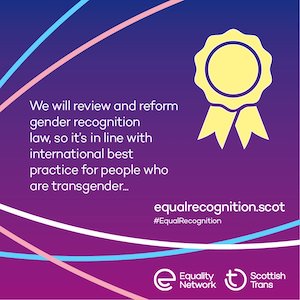 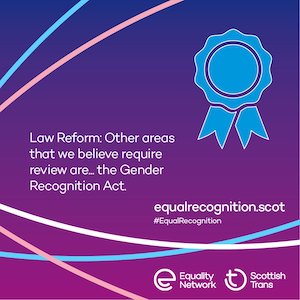 In Scotland, one of the most pernicious bits of anti-trans bullshit is the claim that gender recognition reform is a sudden development, something the Scottish Government is doing in secret and trying to rush through so that women’s groups can’t object.

Not only does that overlook the extensive, well publicised public consultation on gender recognition that ran from November 2017 to March 2018, that received formal submissions from all the key women’s groups in Scotland and whose responses were overwhelmingly in favour of reform. It also ignores the fact that gender recognition reform was a manifesto commitment of every major Scottish political party in 2016.

Here, courtesy of @scottishtrans, is what the parties had to say in their 2016 manifestos.

Scottish Labour wouldÂ “provide legal recognition for people who do not identify as men or women and remove the psychiatric diagnosis…Scotlandâ€™s young people…would be entitled to do so from the age of 16”.

The Scottish Liberal Democrats would bring gender recognition “into line with international good practice…including consideration of the medical requirements placed on applicants, and recognise the gender identity of nonbinary people.”

The Scottish Greens: “We will back the campaign to reform gender recognition law in line with international best practice.â€

Just because some anti-trans activists didn’t notice â€“ a claim I doubt given the formal submissions by various anti-trans and religious groups during the 2017 consultation, all of whom made their supporters very much aware of the issue â€“ doesn’t mean it was a secret.

The reason gender recognition reform didn’t hit the headlines back in 2016 is because it was, and is, a slight reduction in bureaucracy that is of no relevance to the vast majority of people.