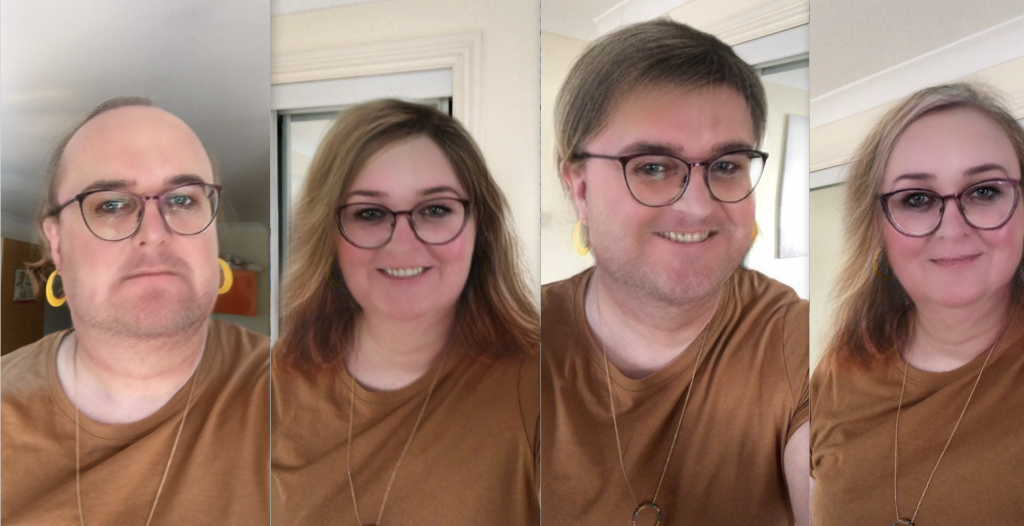 The chat app SnapChat is back in the headlines after its new gender-swapping filter went viral. The filter makes boys look like girls and vice-versa, and as you can see above the results are pretty funny â€“ although I seem to have the dubious honour of being the only person who looks older when the feminising filter is switched on. Boo!

I think it’s just a bit of daft fun, albeit horribly stereotypical in its idea of gendered appearance,Â but on trans forums I’ve seen a range of reactions from trans people: some like me just want to see what it does and how daft the results are, but others see what they might look like after transition â€“ or more poignantly, what they might have looked like had they transitioned. Not everybody is in a place where they can be themselves.

Like anything else on the internet, some people have concerns about the filter – Time magazine covers the issues here.

While many acknowledged that the filter is fun, for some itâ€™s been jarring to see their social networks manipulating their gender so casually. Others have said that they are concerned that some people are using the filter in problematic ways.

Most sensible concerns aren’t about the filters, but the way they’re being used. Some people â€“ man people, inevitably â€“ are using the filters to make profile pictures for dating apps. The intention is to have a laugh, and some have shared the saddeningly predictable responses they’ve received with hilarious consequences. But some people argue that what these people are doing ties into something that’s a lot darker, which is the concept of trapping.

“Trap” is a word some people use to describe trans people, primarily trans women, who don’t look trans; it’s a trope in some pornography where a man is seduced by a beautiful woman before, surprise! But out in the real world, trap is a slur associated with violence. There have been multiple occasions of very violent and sometimes fatal attacks on trans women, the perpetrators claiming the “trans panic” defence: I took her home, I didn’t realise she was trans, and when I discovered the truth I lost my mind. It’s a variation of the gay panic defence, and sadly it’s still a legal defence in many parts of the world.

As CÃ¡el Keegan points out in the Time piece, playing around with gender is something many trans people don’t have the privilege to do in safety.

â€œIf trans people are accused of trapping, it can be deadly,â€ said Keegan. â€œItâ€™s a privilege to be able to play with being a different gender.â€

I thought this post â€“ which went viral on social media a few days ago â€“ made a good point: 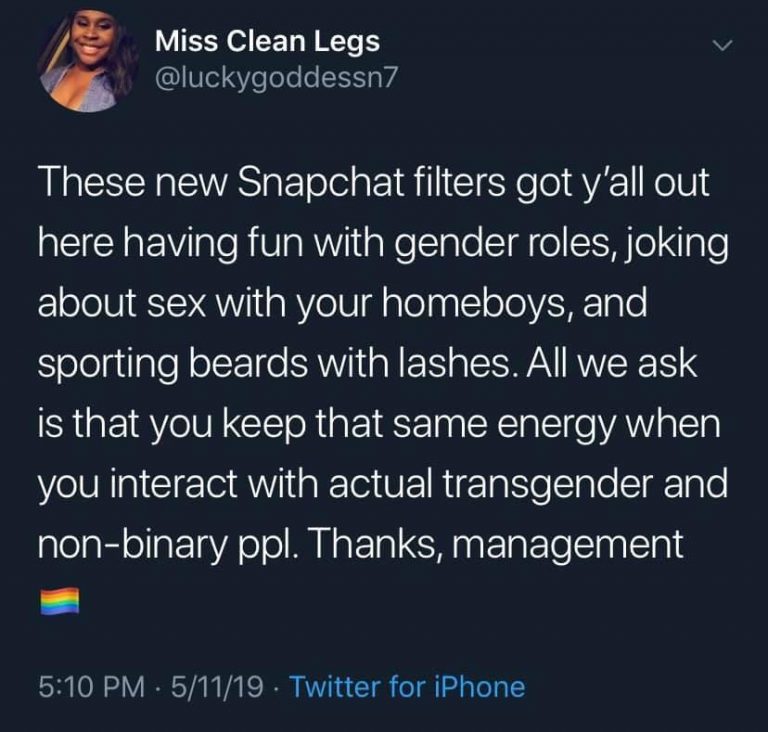 For trans people, transition is a lot more difficult and a lot more painful than playing with an app on a smartphone.

As one of Time’s interviewees put it:

At the end of the day, you get to just turn it off and itâ€™s not sort of a reality for you.