Not a jolly good Fellow

You can tell a lot about the UK newspaper industry by the people the Society of Editors chooses to garland in its annual UK Press Awards. This year, as if anointing the Mail on Sunday’s Sanchez Manning “specialist journalist of the year” for her ongoing campaign of anti-trans scaremongering and vilification wasn’t bad enough, the creator of this repellent cartoon was made a fellow of the Society of Editors. 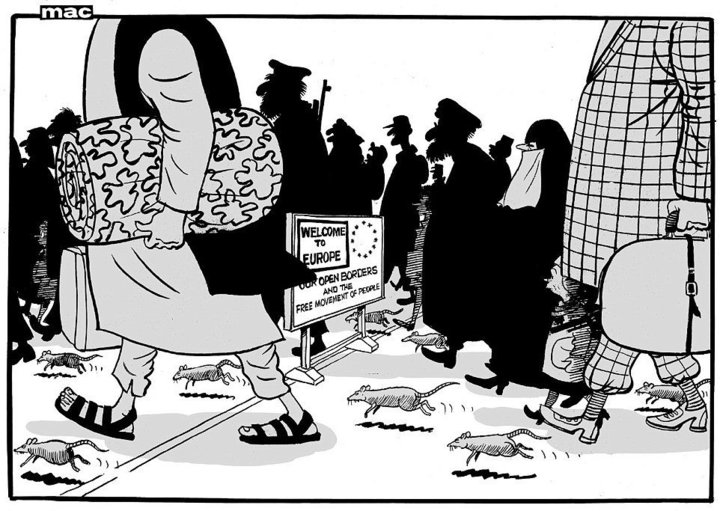 Now you might think that showing sinister, hook-nosed figures marching over borders and depicting foreigners as vermin is a chilling echo of the Nazi propaganda cartoons of the late 1930s. And you might think that a political cartoonist with five decades in the newspaper industry might have at least a working knowledge of the history of political cartooning. But you’d be wrong, because Mac just happened to replicate Nazi propaganda by accident.

He had quite a few accidents, it seems.Â One cartoon, in which Mac responded to the NHS recruiting overseas doctors by showing a black immigrant “witch doctor” frightening a white NHS patient, resulted in an apology from the Daily Mail to the British Medical Association. Many others portrayed black people as big-lipped, boggle-eyed, loincloth-wearing savages. In 2010 Mac illustrated “multiculturalism” by showing a man marrying a farm animal, and in 2015 he depicted the newly deceased entertainer Cilla Black being forced to wait at the pearly gates because “there are thousands of illegals trying to get in.” In 2017 he equated refugee boat people with monkeys.

There’s an irony here. The society of editors, which claims to represent the very best of the UK newspaper industry, has missed a very important piece of news: it isn’t 1971 any more.

The thing about diversity is that without it, you can be blinkered. I’ve seen many white, cis, straight men defending Mac’s worst cartoons on the grounds that they don’t think the cartoons are racist, or homophobic, or offensive generally. And with the greatest respect to those people, if you’re not a member of a minority group then you don’t get to say whether it’s offensive to that minority or not. Just because something doesn’t affect you doesn’t mean it doesn’t affect people who are different to you.

Ironically enough, that lack of diversity was demonstrated last night by the inaugural diversity award. It went to a white man. A gay white man (the excellent Patrick Strudwick of Buzzfeed), admittedly, but hardly a sign that the media establishment values writers from other ethnic backgrounds. As someone pointed out on social media, there were more people of colour serving wine than sitting at the tables, let alone being nominated for any awards.

The awards have been running since 1962 and are some of the most prestigious in the industry â€“ but not one black woman or non-binary journalist featured on the list of 157 entrants this year. To add insult to injury, just three people of colourâ€™s names made the cut.

…If people of colour only scrape into the lowest positions in news and media organisations, itâ€™s naturally less likely that our ideas will ultimately get airtime…Â this is a problem that canâ€™t be radically overhauled by simply appealing to â€œdiversityâ€, particularly if itâ€™s only in the lowest ranks of an organisation. Meanwhile, actively harmful coverage of marginalised groups within the very same papers doesnâ€™t create an environment that feels safe for us. That includes the rampant transphobia thatâ€™s swept the mainstream press in recent years and seen the likes of Janice Turner â€“ who claimed that children had been â€œsacrificedâ€ for trans rights â€“ up for journalism awards.