We always come back to the ones we love 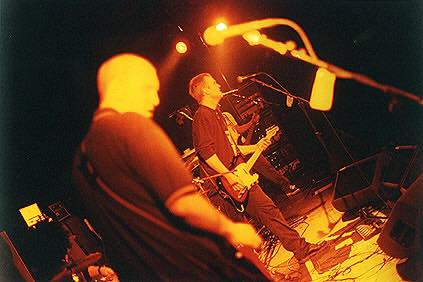 This rather poor quality photo is from October 1998, long before decent digital cameras or smartphones. It was taken on stage at Glasgow’s legendary Barrowland, where my band had been picked as the local support for Mansun. I’m the skinny guy in the middle of the shot (lead guitarist Mark Clinton, now of The Lonely Souls, is in the foreground and bassist Chris Warden is just visible behind me), and I’m playing my favourite guitar.

I’ve owned quite a few guitars, but my Telecaster was always my favourite. It cost a ridiculous amount of money when I bought it back in the mid-90s, but I got my money’s worth: I played it on stages and in studios for years, and I’ve still got it today. It hasn’t been played for a very long time, though, because other guitars have competed for my affection: the beautiful but ridiculously big Epiphone Riviera I got for my 40th, the wonderfully quirky Fender Marauder I do most of my songwriting on, the Fender Stratocaster I rehearse with and the pointy Epiphone Explorer I play when I want to, er, play something pointy.

There are other reasons. I didn’t play it because there was something wrong with the pickup switch, so it could only make its most screeching sounds â€“ something Telecasters are brilliant at, but which you don’t want all the time any more than you’d want to eat steak for every meal â€“ and I didn’t want to spend money getting it fixed because I was always broke.

And I didn’t play it because it’s part of my past, which I don’t always want to think about.

But it was, and is, a beautiful guitar.Â So the other night I decided to get it out of its case.

It was a strange feeling because I genuinely haven’t looked at it, let alone touched it, for years. The catches on the case were stiff with rust, the case itself covered with access all areas passes for gigs so long ago I can barely remember the venue, never mind the gig. But the guitar itself was just as it was the last time I played it. It was even in tune.

It’s really, really weird to pick up a guitar that you haven’t played for years when you used to play it all the time, to feel the weight of it, the tension of the strings, the way the strap feels on your shoulder, the height of it, the way it fits in your hands. All of the things you got used to over time, all of the things your other guitars don’t have. It’s like getting into your own bed when you’ve been staying somewhere else: the beds do the same job, but only one of them is yours.

It turns out that the problem was so simple to fix that even I could fix it, so I did. And I plugged it in, and I played it, and heard that sound, the sound only a Telecaster makes, the sound only my Telecaster and my fingers make.

And I realised that while I like all of my guitars, there’s only one that I ever loved.