The girl in the picture 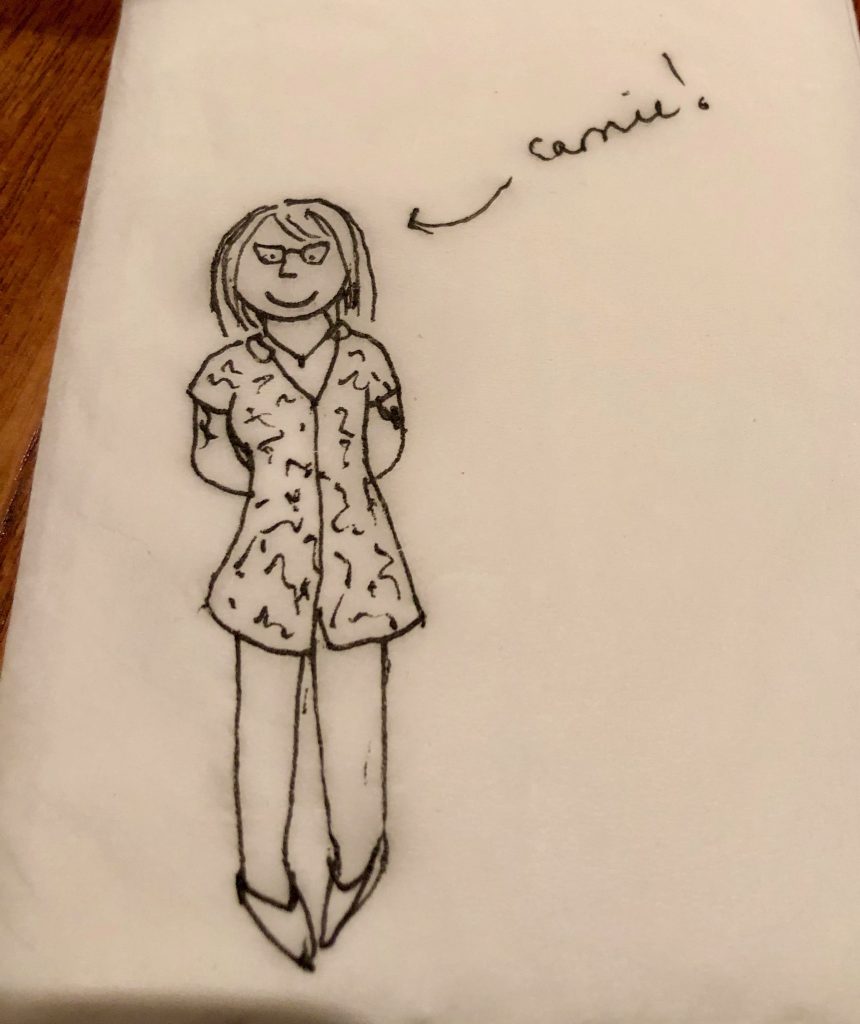 My friend drew this in the pub last night. I got a bit emotional.

For the last 10 days I’ve been in enforced boy mode: because I’ve taken on quite a lot of extra electrolysis sessions to remove my facial hair, I haven’t been allowed to shave. You can’t zap and pull stubble out if there isn’t any stubble to zap or pull.

It’s been really horrible. I normally get electrolysis once a week, a necessary evil that I’ve timed so I can stay smooth-faced over the weekend and into Tuesday, but I haven’t been able to do even that.

One positive is that with the extra stubble I could see how much progress I’m actually making with the electrolysis â€“ where I would previously have had a full ginger beard after a week without shaving, now I just have a bit of white stubble on my face and a bunch of white hairs on my neck. After eight months you do start to feel that the sessions will go on forever, so it’s good to see visual evidence that you’re making progress.

But that’s about the only good thing about it. The sessions have been painful, more so than usual, and I’ve spent ten days with a red, swollen, stubbly face feeling hideous, feeling I’m taking a massive step backwards.

I hate presenting as male now. I feel like a fraud, an actor playing a part I was never any good at and which I’m even more hopeless at now.

Going to work at the BBC yesterday in boy mode for the first time since I came out felt particularly horrible. I bumped into people I like and respect, people who haven’t seen me in boy mode for a very long time, and couldn’t help wondering what they thought of seeing me like that. It brings back all the negativity of being trans, the feeling that people are looking at you and laughing behind your back.

Being mid-transition is horrible. My hair isn’t long enough yet. I still have stubble. HRT has made me put on weight but hasn’t yet redistributed fat deposits and given me a more feminine shape. You’re stuck between two lives, or at least I am: presenting male in front of the kids and until electrolysis, then trying to cram being you into Sunday and Monday. All the while you hear the voices: what the hell do you think you’re doing? There’s nothing remotely feminine about you. You’re not right in the head. You’re a laughing stock.

I was finally able to get rid of it all yesterday, so I made a bit of an effort before heading to the pub. I wore a nice, flattering dress and put a lot of effort into my make-up, and when I was done I looked in the mirror and saw something I haven’t seen for a couple of weeks now, something I was told for too many years that I would never see.

Last night, after I took it all off, I paused at the digital photo frame in my hallway. It’s packed with family photos, me and the kids, and I was stopped in my tracks by one in particular. It’s me and my son, about three years ago. We’re both laughing; he has long hair and I have a beard, which is how I can date the photo: that was before I came out so it’s early to mid 2016.

I looked at the photo of the man I used to be. And I looked up, into the mirror.

It’s more than makeup, more than a nice dress, more than jewellery. It’s about a couple of years of hormones making subtle changes, changes that don’t seem like much individually but that make a difference over time, changes that you don’t necessarily notice until you really look at a picture of who you used to be.

I looked in the mirror, and I didn’t see him. I saw the girl in the picture, the me I am and should always have been.