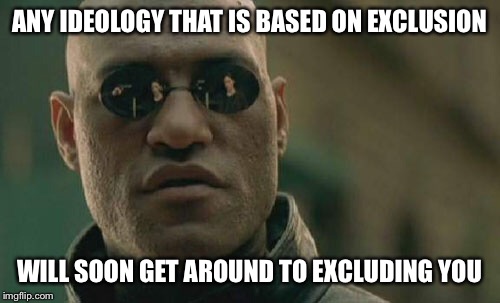 Every few months, a new bunch of ageing transsexuals will write a letter to The Guardian or they’ll write an open letter on the internet in which they moan about the “transgender umbrella” and how it’s just too broad. Various different people have been writing the same thing since about 1973, and while the names sometimes differ the song hasn’t really changed: look at all these pervs and weirdos claiming to be like us! They’re not proper transsexuals like we are! They make us sick! We refuse to be associated with them! Let’s throw them under the bus!

I’d do a parody of it, but Natalie Reed already did a great job seven years ago.

You know, Iâ€™m sick of all this â€œumbrella termâ€ nonsense. Why should I be associated with a bunch of freaks like drag queens, â€œbutch trans dykesâ€ and non-op transgenders? Iâ€™m a real transsexual, a real woman. I fought hard in order to be able to be accepted as a woman, and having a bunch of people who arenâ€™t even interested in getting surgery, or wearing skirts, or doing guys, going ahead and jumping into our â€œcommunityâ€ and making us look bad is just undoing all of what us real transsexuals, who are really women, fought to attain. Iâ€™m sorry, but male means penis and female means vagina. You just need to accept that. Itâ€™s common sense. Yes, there are women like me who are born trapped in menâ€™s bodies, who get surgery to have vaginas and therefore become women, but you canâ€™t just say â€œIâ€™m a womanâ€ and have your â€œself-identificationâ€ magically make your penis no longer a penis. Itâ€™s crazy and ridiculous, and you make us women who were simply born with a physical defect and sought to have it corrected look crazy and ridiculous too. I donâ€™t care what you transgenderists want to do with your weird perverted fetishes and such, but donâ€™t go dragging us real women who are really transsexual down with you.

These are the people who join hands with rabid anti-trans bigots and who actively campaign against trans rights. Reed rightly describes them as “the capos and Quislings of the trans community, passing on information to the guards of the gender prison in exchange for an extra cookie on their lunch tray.”

This is important, because legal rights depend on definitions. Under UK law, I am protected from discrimination; if you punch me, it’s a hate crime. But that has only applied since I decided to undergo some form of transition from male to female. Before that decision I was still trans, but I wasn’t trans enough in the eyes of the law.

The most recent example of the “we’re true trans and everyone else can get stuffed” is in the form of a blog demanding the charity Stonewall stops fighting for transgender rights (no link, because arseholes). Not all transgender rights, though. Just the rights of people who aren’t exactly like the people writing the blog post.

Not everybody who’s under the trans umbrella will take hormones, change their name or undergo surgery. But the people who would fire us, evict us or beat us up don’t care. Nobody asks to see your Gender Recognition Certificate before deciding whether to punch you.

I’m one of the so-called “true transsexuals” these clowns claim to be: I’ve got the medical diagnosis and the 12-weekly needle in the buttocks to prove it. But I don’t feel that I’m any more valid than someone who’s non-binary, or who decides that the risks of social, hormonal transition aren’t worth it, or anybody else of whom the desiccated gatekeepers disapprove.

You see, we may understand those nuances and differences. We know the difference between intersex and genderqueer, cross-dressing and drag, trans man and butch lesbianâ€¦ but the haters donâ€™t. They donâ€™t really care. They see a big icky rabble of icky queers and they want us gone, no matter how exactly we differ from their heteronormative, cisnormative expectations.

We’re all different, but we all have one thing in common: we’re under attack.

These kinds of internecine divisions, hoping to somehow move forward in cultural acceptance by ridding yourselves of the unseemly lower classes of whatever, do absolutely nothing for progress. What they do is reinforce the scaffolding on which the oppression was based (for instance, the idea that certain kinds of gender are more valid or â€œrealâ€ than others). Whatever extra cookie you may get on your tray when lunch is served in the prison, youâ€™re still stuck in that prison, still dependent on the guards, and will remain so until we cooperate effectively and build a tunnel.

If the only way to save yourself is to use other people as a human shield, you’re not worth saving.