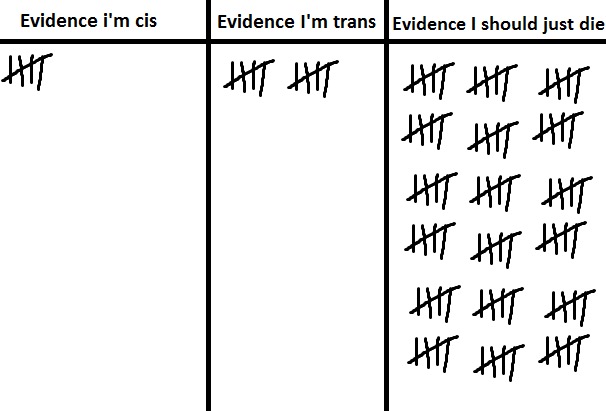 Two years ago today, I began coming out as trans. I say “began” because while the initial announcement is an event, it’s merely the beginning of a process. I come out all over again every time I walk out the door, every time I pick up the phone, every time I meet someone new.

Not everybody chooses to come out. On a forum I frequent, one trans woman has decided not to come out. She fears losing her relationship with her family, fears her ex making it hard to see her kids, works in an environment where she has reason to believe coming out would cost her her job.

“It really feels like a step too far,” she says, “especially with attitudes towards trans people being what they are in the UK at the minute. I’m not sure I could take the abuse if it came.”

Her decision is the opposite of mine: better to live a miserable life than to lose family, friends, job and everything else. And for her it’s clearly the right decision.

I can understand that. In very many ways the last two years have been the worst two years of my life. They’ve definitely been the hardest. I lost my marriage, moved out of the family home and see much less of my children. I lost most of my friends and have had many close relationships stretched to breaking point. Maybe beyond breaking point. I spend two hours a week getting stubble torn from my face in an ultimately futile attempt to make me appear more feminine, my face sore and swollen for days afterwards, while the hormones that make me feel better have made me put on so much weight I can’t bear to see myself in photographs. People stare, and talk about me. Some days I’m so sad I can’t function. I have no doubts that I’ll die alone.

I was asked the other day: was it worth it?

And I honestly can’t answer that, because I don’t feel it was a choice. I didn’t come out because I wanted to. I came out because I had to. I’m certain that if I hadn’t, I wouldn’t be here. And sometimes I wish I’d taken that option instead.

Don’t worry. I’m fine. I have good friends now, reasons to be cheerful. But sometimes I think we need to stop fixing a smile for just a little while and say: you know what? Being trans is incredibly, unbelievably shit sometimes. I’m amazed that so few people detransition (that is, go back to living in the gender they were assigned at birth): to be looked at and often stared at every time you go anywhere, to be constantly misgendered, to be attacked by politicians and pundits, to see a body you didn’t want in the mirror, to spend a significant amount of your time feeling scared… who would choose that?

I chose that. But it wasn’t really a choice.