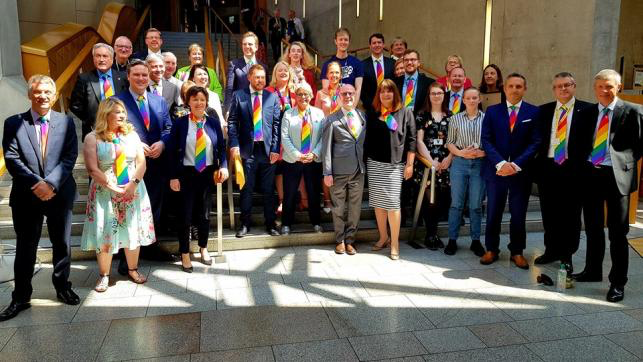 I liked this photo: it shows members of the Scots parliament wearing rainbow-coloured ties to mark their support for the TIE campaign.

The TIE Campaign only three years old but is doing great things in Scottish schools. It aims to reduce bullying and ignorance by encouraging LGBT-inclusive education in schools,Â and it works.

Nearly all pupils, 96 per cent, said the events in schools had made them more aware of the impact of homophobic, biphobic and transphobic bullying and attitudes on others, while 92 per cent said theyâ€™d since reflected on their own use of language.

Furthermore, of those pupils who said they previously held negative views towards the LGBT community, 86 per cent said their attitudes had changed positively after attending the assemblies.

If that was all the TIE Campaign had achieved in three years it’d be impressive enough: reducing bullying is an incredible thing. But there are more benefits to inclusive education. It’s encouraged kids to seek better information about safe sex and relationships, and by questioning gender norms it’s helping non-LGBT kids too. As guidance teacher Chloe Divers from Motherwell told the Herald:

One of my colleagues, a computing teacher, has found she has more female students signing up when traditionally it was more male. She thinks because weâ€™ve tackled this as a whole that weâ€™ve challenged stereotypes and broken down gender norms. So weâ€™re finding itâ€™s breaking through into choices now as well.

…schools are still only emerging from the shadow of Section 28.Â The law, repealed in 2000, prevented teachers from discussing LGBT issues with children in schools.

We can’t reverse the mistakes of the past, but we can ensure we don’t repeat them today.