PinkNews has discovered the latest incarnation of the sinister transgender agenda: we’re turning alligators into gal-igators.

That’s the claim from the anti-trans We Need To Talk group, whose meetings are conducted in great secrecy for fear the wider world would discover how deranged they are. As PN reports:

Elizabeth spoke to the audience about â€œsynthetic hormonesâ€ taken by transgender people.

â€œAnother thing that really breaks my kind of heart is oestrogen-ic pollution, which is that because of trans and because of HRT [hormone replacement therapy],â€ she said.

â€œWeâ€™re peeing a lot of oestrogen, synthetic oestogren [sic] into the water and thatâ€™s forcibly â€˜trans-ingâ€™ the fish, and that means that crocodiles and alligators are in danger.

â€œIt means fresh water fish are in danger. It means weâ€™re destroying the world partially because of the trans ideology. 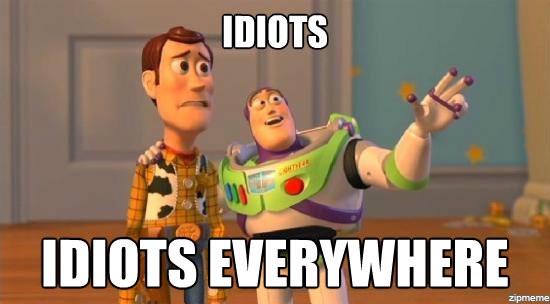 The Venn diagram between anti-trans views and dingbat conspiracy theories has a huge overlap. It’s been claimed by people who are allowed to drive cars and operate heavy machinery that trans people are part of an international Jewish conspiracy, that we’re paid stooges of a Big Pharma conspiracy to get girls hooked on testosterone, that we’re soldiers of the Illuminati and so on.

Debunking conspiracy theories is rather like kicking a baby: it’s not a challenge and it isn’t any fun. But here goes. Is trans women’s urine transing Nemo?

First up, the hormones are bio-identical â€“ they’re chemically identical to natural oestrogen. And secondly, if oestrogen is your concern then trans women should be very far down your list.

The last time we had a trans-fish scare, women on The Pill got the blame.Â If oestrogen is indeed feminising fish, we need to start with the many millions of farm animals on hormones: the annual oestrogen discharge by livestock in the US alone is twice that of humans. Once we’ve solved that, we could look at the 5-plus million women in the UK on hormonal contraception and HRT. Then by all means investigate the urine of a trans population measured in the thousands.

Like so much anti-trans rhetoric, blaming trans women for oestrogen in the water supply is just taking the piss.

As the authors of a 2009 scientific paper in the journal Sexual Development noted, â€œIn the popular cartoon movie Finding Nemo, a male anemonefish loses his mate and must struggle alone to raise his offspring Nemo. In real life, Nemoâ€™s father likely would have switched sex following his mateâ€™s death, and then paired with a male.â€