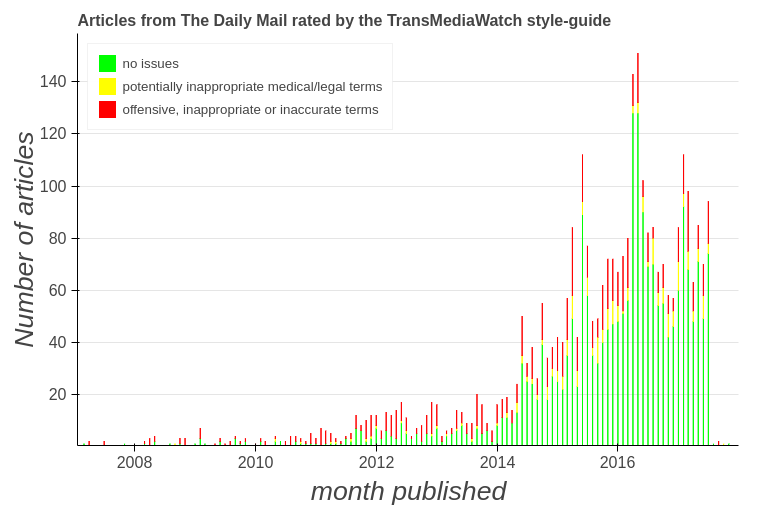 Trans Media Watch’s submission to Parliament on the subject of hate crime and biased media reporting is pretty frightening.

In 8 weeks from March 2018, TMW identified 445 pieces about trans/intersex/non-binary people in UK newspapers (the study excluded LGBT titles such as Gay Times, Diva etc and religious titles such as The Catholic Herald). The Daily Mail and Mail on Sunday alone accounted for more than 120.

TMW’s analysis is fair: it covers a huge range of titles (the Hull Daily Mail and The Grocer as well as the Fleet Street titles) and as you can see from the included appendix and the graph I’ve embedded at the top of this post it includes positive stories as well as negative ones.

Trans people have come to dread Sundays in particular, because the Mail on Sunday and Sunday Times run anti-trans pieces every week: between them they ran 23 pieces about trans people during the 8 week monitoring period.

So I thought it’d be interesting to go with numbers rather than just gut feeling, to compare the number of positive stories about trans/intersex/NB people against the ones suggesting we’re involved in child sacrifice or the ones – particularly in the Sunday Times – that get retracted weeks later because they are complete bollocks.

Neither paper had published any positive stories.