Iâ€™ve had a massive crush on Shirley Manson for more than 20 years.

To be honest, Iâ€™m suspicious of anybody who doesnâ€™t have a massive crush on Shirley Manson. Fierce, funny, impossibly talented, Scottish, ginger and drop-dead gorgeous, the Garbage singer is one of rockâ€™s great personalities, and the way she rocked her combination of cute dress, black tights, clumpy boots and fuck-you attitude did all kinds of things to me back in the day. She’s just as amazing now, and Iâ€™m absolutely convinced that if I were to meet her Iâ€™d be incapable of speech.

Thereâ€™s a saying about rock stars that the fans of your own gender want to be you and the ones of the other gender want to be with you. With Manson I always felt both: if I could have magically transformed myself into somebody else it would have been Shirley every time. Especially Shirley in the Only Happy When It Rains video.

I still feel like that today. When I discovered by accident that I had bought a dress very similar to one Shirley wore recently, I damn near exploded with delight.

I think thatâ€™s something sheâ€™d approve of. Sheâ€™s long spoken out on behalf of the outsiders, the â€œqueerest of the queerâ€, and itâ€™s a recurring motif in her music. The first time I saw the Androgyny video â€“Â Manson blurring gender roles while singing â€œboys in the girlâ€™s room, girls in the menâ€™s room, you free your mind with your androgynyâ€, her lascivious, lusty â€œboyyyyyyysâ€ and â€œgirrrrrrrrlsâ€ punctuating the chorus â€“ I had to have smelling salts and a lie down.

I never tried to be Shirley Manson in real life. The look and the attitude were for my imagination, not my everyday: androgyny wasnâ€™t the kind of thing you could get away with in my town, and Iâ€™d never pass as a woman. 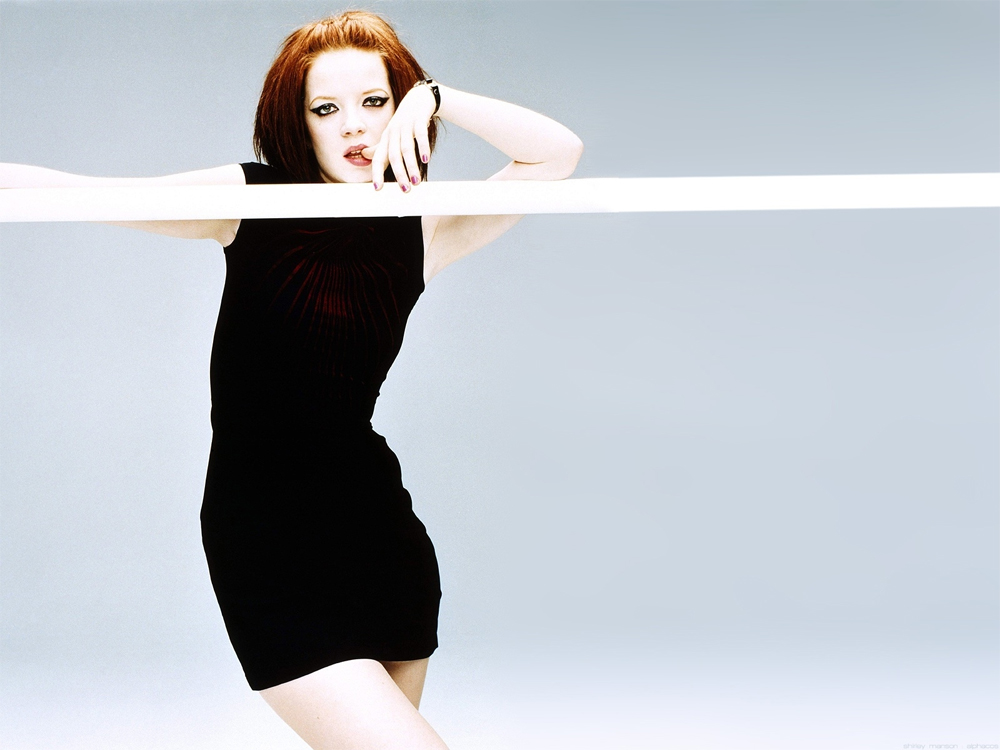 In an excellent article for Allure magazine, Katelyn Burns writes about the impossible standards to which trans women hold themselves.

Before I transitioned, I had a very palpable sense of the â€œtooâ€: I was too tall, too fat, too bald to ever be a â€œrealâ€ woman, so what would be the point of even trying to transition? Itâ€™s a common sentiment among trans woman and a direct result of the impossibly narrow box within which society confines women’s appearances. For many trans women, male puberty puts cisnormative beauty permanently out of reach; for others, the idea that the world could see them the same way that they see themselves is the stuff of fantasy.

And thatâ€™s a great shame, because that fear holds us back from being ourselves, from experiencing the world as it should be.

This is something Iâ€™ve been thinking about a lot of late because Iâ€™m still in the transitioning trenches, trying to work out my identity and how I want to exist in the world. The judging Katelyn writes about makes me feel pretty crappy quite a lot of the time, but sometimes the heavens align and I feel pretty damn good about myself.

It happened the other night. I was going to see an avowedly trans-inclusive punk rock band, so instead of my more usual androgyny I decided to let my inner Garbage fan come out. I chose a dress I really, really love, teamed it with thick black tights, got my make-up just right and spent a bit of time sorting my hair out. And I looked bloody amazing.

Iâ€™m under no illusions about what I look like: Iâ€™m very tall, very big, overweight. But when my presentation gets close to looking like the person I want to be, thereâ€™s a joy I find really hard to describe, a feeling that everything has magically clicked into place.

And sometimes other people validate that. Iâ€™ve been chatted up by strangers at gigs, complimented by women in bars, received throwaway comments that have kept me walking on air for days. Before I went to my punk gig, I popped into my local to see some friendly faces: I might have felt amazing, but the prospect of going into town wearing a dress for the very first time was still frightening, not least because I was going to meet a friend who had never seen me presenting as Carrie before. So I needed to do it in stages: go to a familiar place first, and then go on into town when the fear had subsided a bit.

Iâ€™m glad I did, because when I walked in one of my women friends was there. â€œYou look really pretty!â€ she said, grinning delightedly before adding â€œIs it okay for me to say that?â€ When I reassured her that not only was it okay, but itâ€™d be even more okay if she could just say it a few hundred more times and maybe put it in writing too, she laughed and told me that â€œseriously, you look really hotâ€.

Before I came out I never dreamed I would ever be told I was pretty, let alone hot. One of the great sadnesses of not coming out until later in life is that youâ€™re stuck with a body thatâ€™s developed in all the wrong ways. But while Iâ€™ll never be mistaken for a pretty young anything that doesnâ€™t mean I canâ€™t be proudly, unapologetically, confidently me. Whoever you are, whatever you identify as, being true to yourself is pretty damn hot.

Iâ€™m going to see Garbage on tour later this year. Iâ€™ll be the one dancing really badly in a cute dress.