Secondary ticketing â€“ the sites ripping off consumers by charging enormous fees on top of industrial scale ticket touting â€“ is in the news again today. We need more transparency about their charges, apparently.

That’s true: the sites use every trick in the book to hide their fees, which are ridiculous. There’s a huge service charge, which can be as much as 30%, and the sites take a cut of the seller’s money too, typically 10% to 15%. Consumers are gouged at every opportunity. For example, GetMeIn â€“ owned by Ticketmaster and promoted heavily on its site, and on the screens in venues such as the SSE Hydro in Glasgow â€“ charges Â£10.57 to post your tickets in the UK. You’d think its buyer and seller fees might include the cost of an envelope and a stamp.

Transparency isn’t the big problem here. It’s the entire industry. These sites, and the sections of the industry that feed them, are making music unaffordable for ordinary people.

What we really need is more transparency about the sheer corruption of the concert ticketing industry. Ticket touting is happening on an industrial scale, and the idea that reselling is just ordinary people who discover they can’t go is absolute bullshit.

This is an industry worth Â£1 billion per year in the UK.

Here’s Viagogo, one of the reselling sites, with one of the 28 pages of tickets for the Rolling Stones in Edinburgh. Many of the sellers apparently bought four or six tickets before suddenly remembering that they couldn’t go. 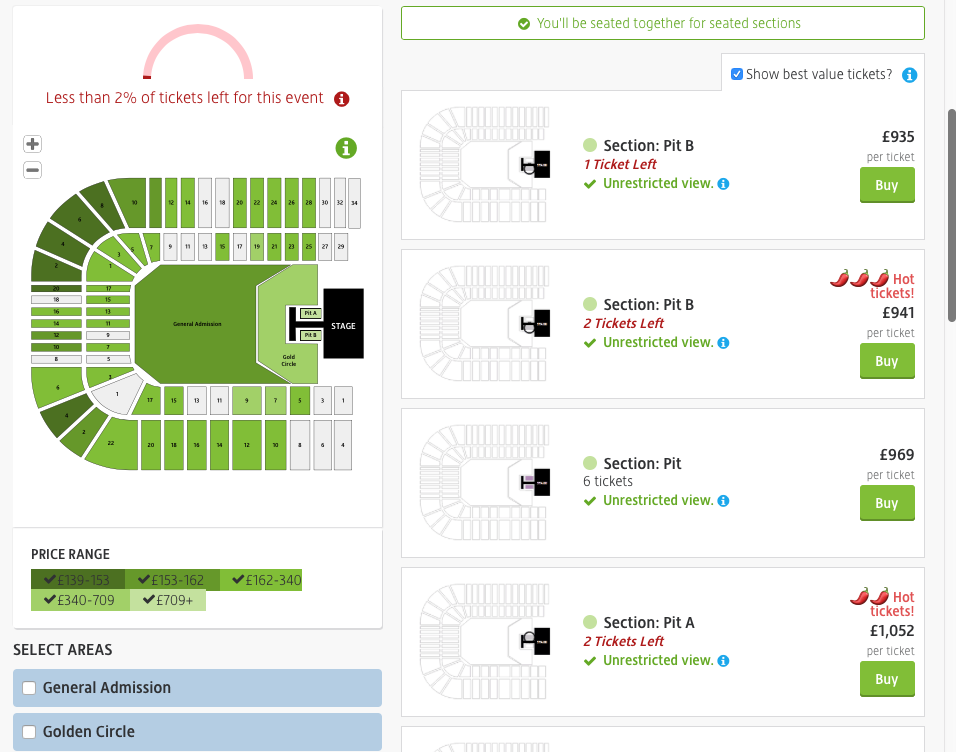 Here’s Iron Maiden’s manager, Rod Smallwood, who found nearly 7,000 tickets for his band’s tour on the resale sites within 48 hours of going on sale.

â€œThe implication is that 6,294 people decided within two days of buying a ticket for a concert taking place in 9 monthsâ€™ time, all of a sudden they canâ€™t go. I mean itâ€™s sheer nonsense, it was just profiteering to the worst degree. The secondary platforms give the real heavy duty touts the ability to sell tickets on an industrial scale.â€

This is anti-consumer behaviour. It’s making art something only the well-off can experience, because whenever you have something for which demand will always outweigh supply you’ll attract sharks.

And the government knows this. This kind of profiteering with football tickets is illegal under section 166 of the Criminal Justice and Public Order Act 1994, further amended by section 53 of the Violent Crime Reduction Act 2006. It was also illegal to re-sell tickets for the 2012 Olympics.

It should be illegal for music too.

If you’d like to know more, the FanFair Alliance has some excellent information for you.