The thoroughly repellent Richard Littlejohn has written yet another anti-trans piece in the papers. It’s not significant in itself; it’s the usual bile from a man who rails against “vicious trolls” while being a vicious troll.

But it’s significant because it’s been published five years since another Littlejohn column was implicated in the death of a trans woman.

Lucy Meadows was 32. She taught year six, pupils aged 10-11, at the St Mary Magdalen’s Church of England Primary School in Accrington, in England. She had a young son.

And in March 2013 she killed herself.

Lucy left a note, which said:

“I try to do things the right way to make people feel more comfortable with it. I have simply had enough of living. I have no regrets other than leaving behind those who are dear to me and of causing them pain in doing so. I would like to thank everyone who has had an impact in my life.”

Lucy had left another note, this one at the front door. Warning, it said. The house is full of carbon monoxide. Don’t come in.

By all accounts, that was typical of her. Thoughtful. Caring about other people, even at the very end.

The coroner confirmed the cause of death: cardio respiratory failure due to carbon monoxide toxicity. But while he said that Lucy had taken her own life, he had another message to share.

“To the members of the press, I say shame,” Michael Singleton, the coroner, said. “Shame on all of you.”

Lucy hadn’t been born Lucy, and she transitioned to live as a woman full-time in Christmas 2012. Her school was very supportive. Head teacher Karen Hardman spoke to each primary school class about the change their teacher would be going through, and it was mentioned as an aside in the school’s Christmas newsletter: “[Name] has recently made a significant change in his life and will be transitioning to live as a woman.”

One parent wasn’t happy and contacted the local newspaper, the Accrington Observer. The story went national. Meadows’ transition was “inappropriate” and children were “too young” to be “dealing with that.”

What should have been a private matter was front page news. The press argued that because the school had written parents a letter, the story was in the public domain. And because of that, they made Meadows’ life hell.

The first and most visible consequence of “press interest” is the press pack turning up on your doorstep. They appeared, en masse, to besiege Lucy in her home. Reporters. Photographers. Camera crew. You name it.

…It might have been less bad if the press could have been relied on to report honestly. But as Lucy noted at the time, they weren’t interested in the many, many positive comments that parents gave out in her support. No: they cared only about the man with the confused child and his petition.

Nor was it just biased reporting. Some columnists – the Daily Mail’s Richard Littlejohn led the way – simply used their columns, read by millions of people to attack a woman who wanted only to live her life in peace. 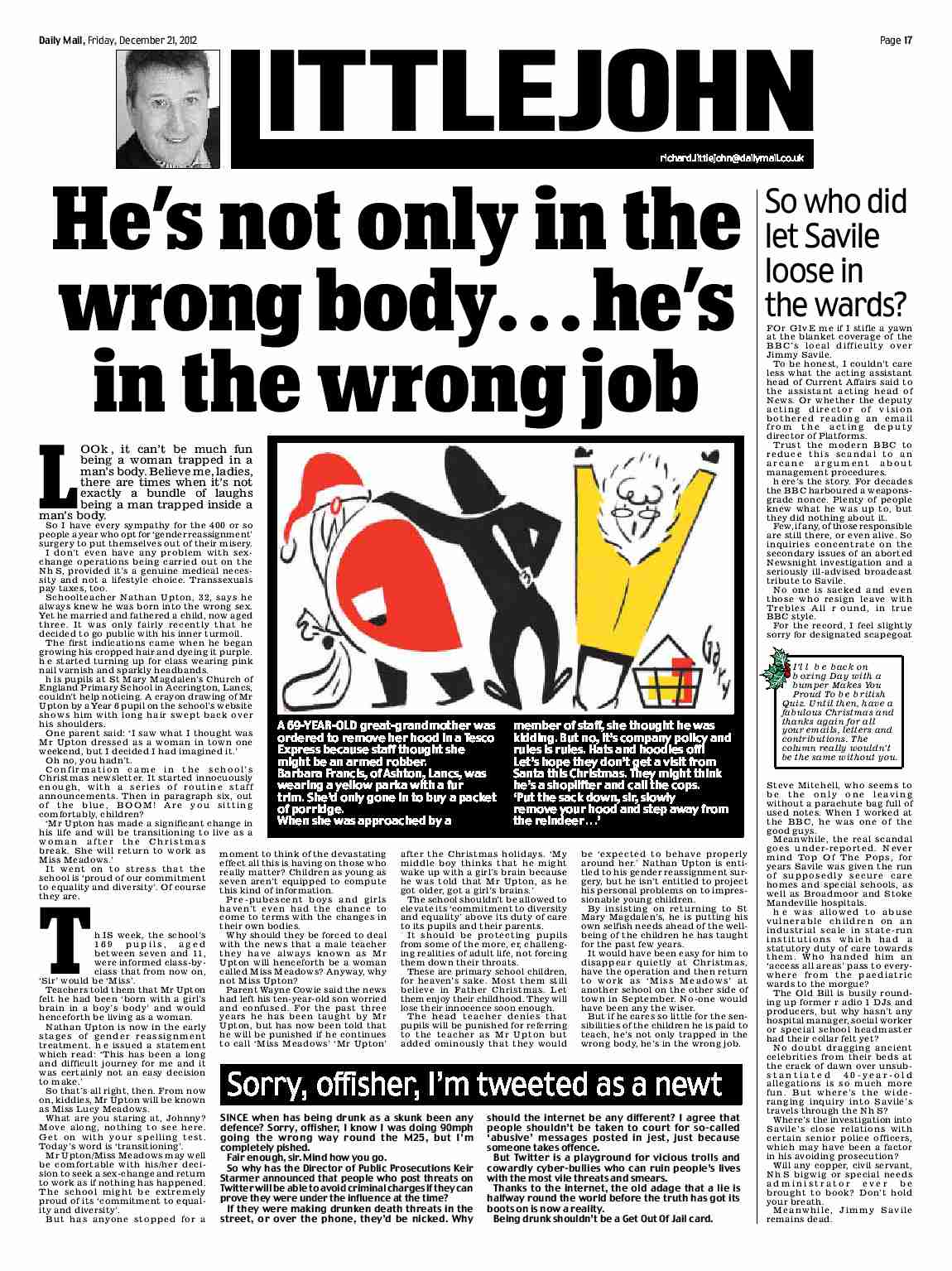 The Mail is so proud of this column they removed it from their online archive.

Deliberately misgendering Meadows as “he” throughout the piece and “deadnaming” her — that is, using her given name rather than her female name — Littlejohn’s piece began with the headline “He’s not only in the wrong body… he’s in the wrong job” and became less tolerant as it went on.

“The school shouldn’t be allowed to elevate its ‘commitment to diversity and equality’ above its duty of care to its pupils and their parents,” Littlejohn wrote. “It should be protecting pupils from some of the more, er, challenging realities of adult life, not forcing them down their throats. These are primary school children, for heaven’s sake. Most them still believe in Father Christmas. Let them enjoy their childhood. They will lose their innocence soon enough.”

He continued: “[Deadname] is entitled to his gender reassignment surgery, but he isn’t entitled to project his personal problems on to impressionable young children. By insisting on returning to St Mary Magdalen’s, he is putting his own selfish needs ahead of the well-being of the children he has taught for the past few years.”

There were petitions to have Littlejohn fired and complaints to the press complaints commission, but the Daily Mail stood by its star columnist, as newspapers do unless the libel bills get too much. A spokesman said: “Richard Littlejohn’s column emphatically defended the rights of people to have sex change operations but echoed some parents’ concerns about whether it was right to for children to have to confront such complex gender problems at such a vulnerable young age.”⁠1

The Mail is so proud of the article that it has quietly deleted it from its online archive.

The coroner didn’t agree that the coverage was fair. It “sought to humiliate and ridicule” Meadows, he said.

Lucy Meadows was not somebody who had thrust herself into the public limelight. She was not a celebrity. She had done nothing wrong. Her only crime was to be different. Not by choice but by some trick of nature. And yet the press saw fit to treat her in the way that they did.⁠2

1 If you’ve ever complained about newspaper articles to the regulator IPSO, you’ll know that their definitions of unacceptable behaviour are so narrow it seems that no publication is ever guilty of anything.