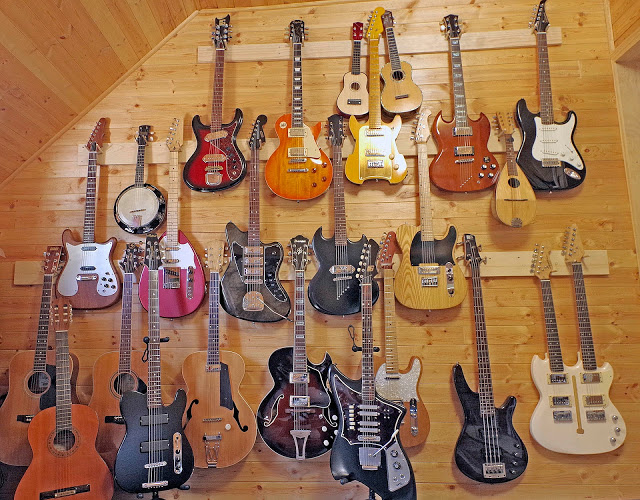 This is a blast: from the previously mentioned Professor Batty, a blog about guitars he’s owned over the years. Discover what happened when Gibson lost its collective mind, what a “demented” guitar that shouldn’t exist is actually like to play and why he’s still got bits of the worst guitar ever made.

Guitars are odd things. I can’t claim to have played, let alone owned, the variety of guitars that the good Professor has, but over the years I’ve still loved and occasionally lost the following:

I’m sure I’ve missed a few too.

It all seems a bit wasteful when I’m a terrible guitar player, my lack of ability made considerably worse by RSI and subsequent carpal tunnel surgery. But musical instruments have a weird appeal whether you can play them or not, because many of them are just incredible objects. For example, here’s what my Epiphone Riviera looks like:

Isn’t beautiful? I look at it more than I actually play it.

Despite still owning more guitars than is necessary or sensible, I still find myself lusting after guitars in unrequited fashion. I particularly desire Gibson’s Explorer, a coffee table with strings often used by U2’s The Edge:

And I’m constantly arguing with myself about the equally mad but slightly rounder Thunderbird bass, on the grounds that I already have two perfectly good bass guitars already. But look at it! It’s a spaceship with strings!

I think it’s one of the most beautiful musical instruments ever made. It’s the work of a chap called Ray Dietrich, who designed car bodies for the likes of Lincoln, Ford and Duesenberg in the 1920s and Chrysler in the 30s, where his designs included the very pretty Airstream. As a huge fan of the subsequent craze for tailfinned cars, the Firebird guitar and Thunderbird bass really appeal to me: they were specifically designed to echo the tailfins of 50s cars.

But everybody has their favourite, and when it comes to guitars mine is the Fender Stratocaster. My one’s a Mexican reproduction of the 1960s original, but it’s a genuinely beautiful guitar to look at and to play.

And even in my raddled hands, the noise it makes is glorious.