The sequel to Coffin Dodgers has stalled because the central crime I came up with was too horrible for a fairly light-hearted read, and the other, more serious book I was doing stalled too. That latter one stalled for various reasons: motivation, confidence, plotting issues, worrying what the hell I’d write after it was finished, obsessing over Breaking Bad, making music, jumping around the room shouting “this is shit! I am shit! Everything is shit!” and so on.

Hurrah, then, for the Bloody Scotland crime writing festival. I dropped Â£80 on a day of writing workshops, and over the course of the day the events – a workshop by Liam Murray Bell, another by Alex Gray, a panel featuring agent Jenny Brown and a keynote by Val McDermid – unlocked various book problems in my head. The best way I can describe it is like picking a lock: each bit of the day picked another tumbler until the entire lock was picked.

I’ve spent the last year looking at this word count menu, which has been stalled at 13,000 words. Since Bloody Scotland: 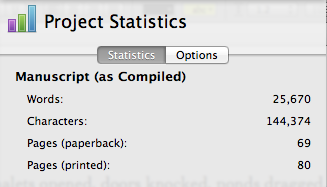 Still a long way to go, but progress at last. I’m excited about it again.

It’s worth noting that I hate workshops, being in a room with other people, having to act like a responsible adult and so on – so if a miserable sod like me can get something out of a writing workshop, then more normal people might benefit even more.