I made another ebook – non-fiction, this time 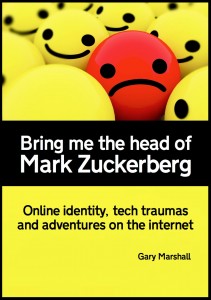 I know what you’re thinking. “Man, if only Gary did more blog posts in which he tried to flog his bloody ebooks!” Well, have I got a happy surprise for you!

Bring Me The Head of Mark Zuckerberg is a new ebook by yours truly, and it’s available right now from – yes! – Amazon UK and Amazon US. This one’s non-fiction: it’s a collection of various tech pieces I’ve written in recent years, some of which are funny and some of which aren’t. Hopefully we’ll all agree on which ones are which.

Ready for some blurb? Let’s go!

Things move fast in technology. In 1998 Google was still in a garage, Microsoft ruled the world and the internet was made of wood. iPods, YouTube and Facebook were years away. Phones were rubbish, getting online cost a fortune and Gary Marshall tried to convince the readers of .net magazine that the Hitler Diaries had been written by a small dog.Â

Luckily for him, the dog didn’t sue.Â

Gary Marshall has been writing about technology like a pixelated PJ O’Rourke since 1998. In this collection of tech journalism from titles including .net, PC Plus, Techradar.com and Official Windows Magazine Gary picks through the PR nonsense, inflated claims and the reality distortion fields of the tech industry to concentrate on the big issues – issues such as, “does Google’s Eric Schmidt really own a coat made of human skin?”, “just how evil does Facebook need to become before people stop using it?” and “why are we being chased around the internet by adverts for horrible shirts?”

As ever, comments, Amazon reviews and offers of six-figure book deals would be very much appreciated.