I’m hopeless at catching programmes when they’re actually broadcast, so it’s taken me a while to get round to watching the DCI Banks adaptations of Peter Robinson’s books. I like the books, but I encountered exactly the same problem I had with the recent dramatisation of Mark Billingham’s DI Thorne novels. No, not the annoying sidekick, or the maverick cop breaks the rules but always gets his man blah blah blah… the problem I had was overacting. It was bad in Thorne, but even worse in Banks.

Put it this way: if you created a drinking game where you had to down a shot every time DCI Banks made this face: 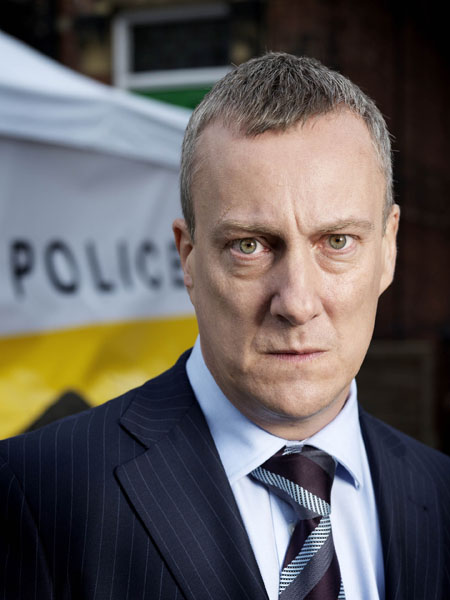 That face put me off the programme. I mean it. It’s not just his “I’m angry at a suspect” face. It’s his “I wish I’d had some toast before leaving the house” face, his “I wonder what I’ll have for my tea” face and his “I’m feeling quite chipper today, actually” face.

I don’t get it. Was there a memo that says all TV detectives are allowed two facial expressions, Really Pissed Off and Absolutely Fucking Furious?

4 replies on “The angry face of DCI Banks”

I watched one of them – the one about the fire on the canal boats. Didn’t enjoy it. He was mis-cast. Same when I watched the John Hannah Rebus ones. Doesn’t fit at all.

It didn’t help that I’d relatively recently read the books and they’d changed loads of stuff in the plot for absolutely no reason, such as swapping the victims around, the gender (and sexuality) of one of the main characters, the age of another (which must have made it very difficult to rewrite), introduced the murderer in a way which made almost no sense and changed a quite major plot point at the end which is something which is referred to in loads of the books which would complicate all the others if they filmed them. I couldn’t finish watching it. Shame, cos I liked the books. No intention of watching any of the others.

I watched the same one. Read the book ages ago so wasn’t really comparing it with the printed version, but I agree entirely with the hannah-era Rebus comparison. The acting was teetering on the edge of parody, I thought.

I suppose that in the books he’s a bit cooler (or at least would like to think he was). In this he’s just old and grumpy. He came across as a grumpy middle manager. You also can’t imagine him and Annie as a couple.

“Grumpy middle manager” is a great description. I think what’s missing from the books is that Banks is supposed to have a rumpled charm. Okay, it’s a cliche, but it means that team members’ loyalty and women’s reaction to him make sense. There’s no sense of that in the telly adaptation.