I’ve got two cameras, a wee Sony Cyber-Shot and a big Sony DSLR. The former’s a great wee camera but a bit rubbish in low light, especially as I have RSI-induced shaky hands, while the latter’s far too big and bulky for casual use. Could a single camera ever offer the best of both worlds?

It turns out that the answer is yes, sort of.

The Sony Cyber-Shot HX9V comes with the usual blah about sensors and intelligent this and that, but it boils down to this: it’s good in low light and it’s good if you have shaky hands. 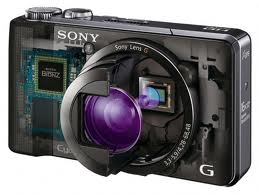 I’ve only been playing with it for a couple of days, but so far I’ve discovered that it’s really good in Intelligent Auto mode and its image stabilisation is really, really good – it’s got an enormous zoom lens but the stabiliser does a superb job of keeping things steady. If it can do that with my shaky hands, it can cope with anything. Its HD video recording is pretty impressive, easily as good as my dedicated HD camcorder, and like other Sonys it has a very clever panorama mode that works flawlessly.

The bad? It’s pricey – about Â£299, although Currys is currently doing Â£30 off compact cameras and Sony’s offering Â£40 cashback on this one until the end of October – and some features can be slow, with a noticeable delay between pressing buttons and anything happening. It has some gimmicky stuff (3D, despite only having one lens; really annoying beeps that, thankfully, you can turn off), the pop-up flash is in a really weird place and it’s big and heavy in compact camera terms. But so far, so good.

I’ll do some proper shooting with it when I get the chance and report back.иконииконопис