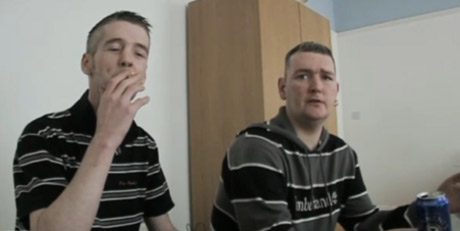 I’ve blogged about fly on the wall documentary series The Scheme a few times here, but the news that it’s now going to be broadcast in the rest of the UK made me want to add another bit.

Having seen the whole series now – including a final episode that made it very clear that the media attention had made some participants’ lives worse – the thing that struck me most about The Scheme was the sheer hopelessness of it all. The families weren’t entirely representative – the programme makers have chosen the most TV-worthy people, so you get people whose lives are slow-motion car crashes – but I’ve met enough people from similar situations to know that life for some people starts off shite and gets progressively worse.

It was summed up for me in one throwaway remark when a teenage boy was being sent back to prison – he hadn’t expected to be sent back so soon. Going back to prison was a given. The only thing that he could even slightly influence was the gap between incarcerations.

There’s an argument that by showing people rotating in and out of prison, trying and failing to get off drugs, self-medicating in various other ways and trying to find things for the local kids to do The Scheme was providing an important service: asking us to look at the affordability and availability of alcohol, for example, or the effectiveness of anti-drug legislation, regulation and intervention, or the links between unhappy childhoods and adult substance abuse, or the way in which some parts of Scotland have effectively been left to rot.

Then again, I know of somebody with real money and real power, riches of the “oh I don’t know, my butler takes care of that” variety. And to that person, The Scheme is quite simply the funniest programme ever made.