Back in January, I wrote this:

I also have a Â£702/year newspaper habit. Imagine if I could come downstairs in the morning, grab the iPad, and use it as a newspaper. Itâ€™s big enough so thereâ€™s still the serendipity of seeing articles you might otherwise miss, and itâ€™s digital enough that I can get my news for free (or nearly free, depending on what the Guardian, Sunday Times etc do about online content).

Now that I’ve spent several weeks sitting on a sofa with only an iPad for company, is it a worthy replacement for print? 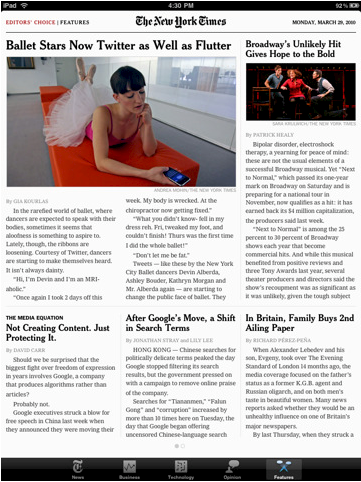 I’ve found newspapers on the iPad a curiously annoying affair. They’re nice enough in the browser but irritating to use – endlessly having to return to the back button is, literally, a pain – and I’m spending much more time in Instapaper than I am on the websites on which the articles are actually published.

RSS isn’t working for me so far either. While apps such as the sublime RSS reader Reeder are good at what they do, the feeds themselves can be irritating as the same story follows you across multiple sections. The Guardian is particularly bad for this, with stories appearing in, say, the Media, G2 and Main News feeds over the course of the day.

Other newspapers don’t even try with RSS: they have headline-only feeds that are pretty much pointless. Such feeds are slower and more annoying than just visiting the website in the first place.

Mind you, they’re not as bad as the tech sites that publish a headline in their feed which takes you to… the headline! Click here to read more! Here’s the headline again, with a link to the actual site it came from this time! Sites that do this, or publications such as Wired whose iPad apps don’t render text – text! – legiblyÂ hate you. It’s that simple. 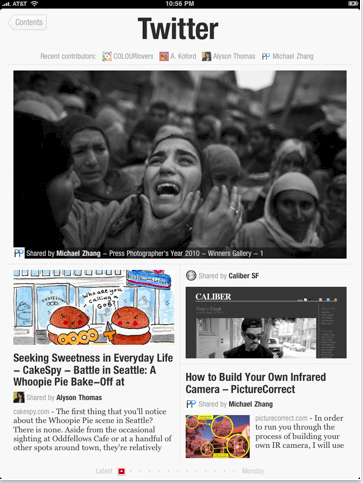 There are a few interesting apps out there, but there are a few disappointing ones too. Flipboard is ok if you like the idea of a paper made only from the links your acquaintances are posting on Facebook and Twitter (I don’t). The much hyped Pulse newsreader excelled at showing the stories I didn’t want to read and hiding the ones I did. The (London) Times app is ten quid a month for a paper I don’t particularly like in its daily incarnation. And The Guardian iPhone app hasn’t made its way across to the iPad yet. Reuters News Pro is quite nice, if a bit newswire-y, BBC News is a bit TV-y and the Huffington Post is too Huffington Post-y.

So far my favourite is the New York Times Editors Choice app. It’s very short (it’s free) but it delivers a lovely reading experience and the serendipity of a good old fashioned bit of newsprint. I could do without the interrupting ads, mind you. 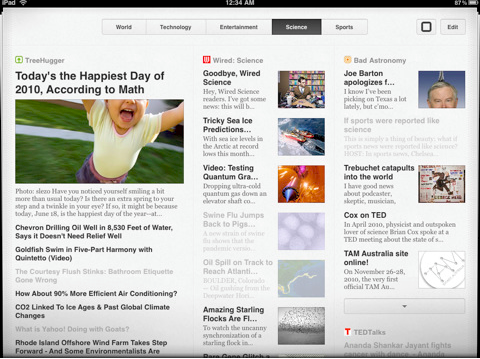 Times for iPad: lots of potential. It isn’t the Times newspaper.

The one app I’m crossing my fingers about isn’t any of the ones I’ve already mentioned, though. It’s Times, the iPad version of a popular OS X RSS reader. The iPad version has a lovely interface, but unfortunately a wee bug affecting many of the feeds I want to use means I haven’t been able to use it for protracted periods yet. I’ll get back to you on that one.

Anyone else exploring print alternatives on the iPad? I’d love to know what you’ve found.